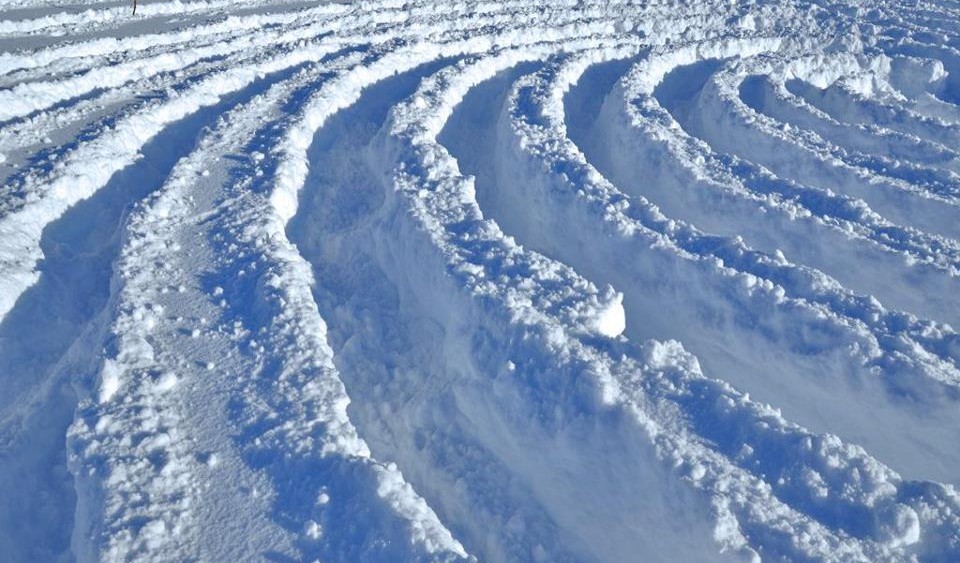 There’s a magical impermanence to Simon Beck’s “Snow Art,” like low tide beach sculptures or Buddhist sand mandalas. Created using snowshoes and precise orienteering, these snow crop circles — which average 10 hours of focused, measured walking to complete — last only as long as the conditions favor them. A stiff breeze, a new snow or a sudden thaw and it’s tabula rasa, all over again. As yourself if you have the love-of-what-you-do, desire, and willingness to put something this “fleeting” out into the world?

An Oxford-educated England native, Beck’s work as an orienteering mapmaker gives him one of the skills necessary to create his art. According to the artist, “accurate use of a compass and distance measurement by pace counting” enable him to be successful. What else does it take? “Physical stamina,” Beck explained in an email exchange.

On the issue of commercialization of his work, Beck had this to say:

I have theoretically been offered several thousand GPB [British Pound Sterling] for three photos but this has stalled as the customer has (on having a better look) asked for higher resolution photos, so the drawings have to be done again so I can shoot them with my new camera (and most likely hire the helicopter). Given better equipment I think I shall make money in this way. It is time to make the commitment and investment.

Most immediately, Beck hopes to publish a coffee table book of his work by 2014.

Currently the artist uses a Nikon D7000 for snapping the photos [usually from the vantage point of nearby mountains or chairlifts], although prior to this season he used “cheap consumer cameras from mass-market retailers.” Oh, and he’s got TSLs or Tubbs strapped onto those feet, for those who were wondering.

Before you go associating these snowshoe shapes with those corn-field cousins, heed this final word of Beck’s into consideration:

A lot of people seem to call it snow crop circles, which I dislike as a lot of those who do crop drawings don’t ask permission and I don’t want to be associated with that sort of illegal activity. I don’t see the need to call it something else [besides “snow art”] but I would be open to suggestions.

Tell me this is superfresh…

*All photos courtesy of Simon Beck.