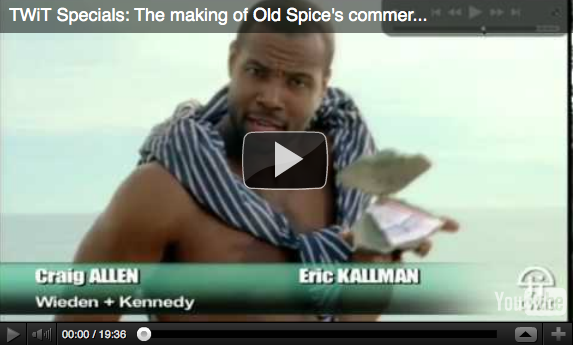 Ok, I promised a follow up to Friday’s funny video post about making sausage. If you missed it, my point was largely that shooting ads and making commercials is much like making sausage–you love the taste of it, but you’d probably risk losing your appetite if you watched it being made.

That last part of that statement is of course tongue-in-cheek, since learning more about how we make this sort of stuff–as it relates to professional photography and video– is likely a prime reason that this community exists, but hopefully you get my point.

That said, I thought the above vid was a great run-down of some more sausage being made, this time not by me, but rather by the fine folks at Weiden + Kennedy (specifically Craig Allen and Eric Kallman – respect!) This piece is in reference to their Old Spice deodorant commercial that ran during the Superbowl (my fav from that day). Here, they appear on Twit TV with Leo Laporte for the full breakdown. I especially like the lines “…we built half a boat”, “…it’s like a poor man’s roller coaster…” and “…those diamonds are pouring over a fake hand…”

Surprised at all that went into this? It’s never a pretty thing, yet it’s beautiful at the very same time. Enjoy this tasty behind-the-scenes morsel.