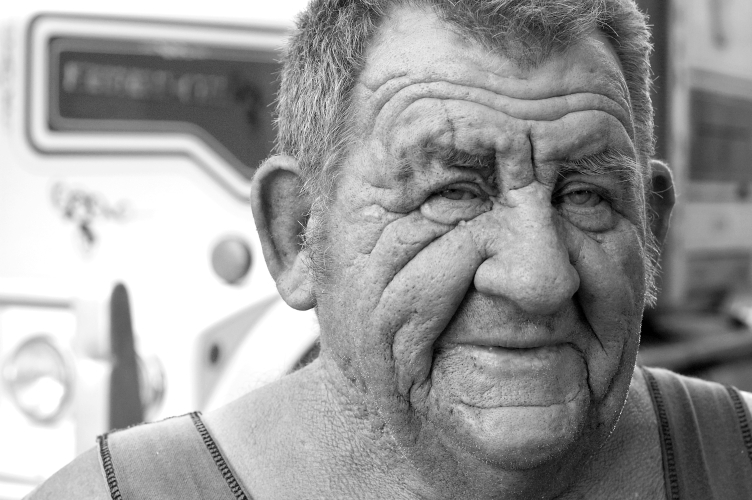 This black and white portrait series has been a hard won achievement by Australian photographer Rohan Phillips. At only 27 years old, much of his teenage and adult life has been spent in and out of hospitals battling life-threatening health problems, including digestive tract paralysis and testicular cancer.  Even after a successful surgery to remove the tumor and cancer cells, he still needs to be “attached to a feeding machine for 17 hours a day, which pumps liquid nutrition through a tube surgically inserted below my stomach. It needs to be plugged in to a power point, which means I need to be lying in bed or sitting down for most of the time between 6pm and midday the following day.”  There were periods where he didn’t feel well enough to leave the house for months, and when he could, it would be to go shoot at a truck stop.  His escape is the very same place where we simply stop to fill up our tank.  This guy gives meaning to the word ‘perseverance.’  Click through the photos above to see more of Rohan’s work.

I had to know more about how he captured such intense emotion in these tough dudes.  Here’s what he had to say:

RP: As a young boy, I was always fascinated by anything with wheels and an engine, particularly big and shiny behemoths like Australian trucks. Around the age of 10-11, my dad would regularly drive me around the industrial areas in my home town of Adelaide, South Australia. With an old 35mm compact camera in hand, he would stop if I saw any interesting trucks parked in yards and factories so I could get out and snap a few photos of the rigs that caught my eye.

While at the local truck stop one day, a truck driver yelled out for me to come over and take a picture of him. Despite being only 32, he had a very weathered, lined face and grey hair. I snapped a few pictures of him, as well as another truck driver who was nearby.  I was quite taken with the portraits, and started going to the truck stop more regularly with the intention of mostly photographing the drivers.

Compared to most other professions, truck drivers are an absolutely fascinating breed unto themselves, with incredibly interesting faces to accompany their entertaining stories about their lives and experiences in the transport industry.  Some of the stories they have to tell are mesmerizing, with the subject matter ranging from having childhood leukemia, recovering trucks at fatal crashes involving family members, being headbutted by an angry bull, to almost losing an arm to a white-tail spider bite.

What was your creative process in capturing such great emotion with these guys?

RP: Many of the guys are very proud of their trucks and are excited to have them photographed.  Once I introduced myself to a driver, we would usually chat for a few minutes.  I would give a bit of direction, like asking them to look at me or changing position.  While shooting, I would keep up a light hearted conversation, saying something weird or funny to get a laugh and more natural expression, like “Have you done much modeling before?” It was helpful if the driver had a couple of other truckies nearby to make fun of him, which usually led to easy laughs and a comfortable expression.  It’s kind of weird that just because I had a camera, I could go up to these rough looking blokes, and within a few minutes of meeting them, could start ordering them around.

Did you learn anything interesting about the trucking life?

RP: Despite the long hours on the road, often away from family and the comforts of home for days or weeks at a time, most drivers love the lifestyle.  The freedom of being out on the open road. The idea of working in the same office cubicle, from 9 to 5 for years on end, would send cold shivers down a truck driver’s spine.  Without the highway and stunning scenery constantly changing in front of them, going to work would be a tremendous bore. Most drivers I’ve talked to wouldn’t give it up for quids, and some have described it as getting paid to be a tourist in your own country.

And despite the rough appearance of some of them, with language and stories that would make a pirate blush at times, Aussie truckies are by and large a kindhearted, hard working and generous bunch of people, always willing to help out a mate in need, or just spend hours exchanging stories over some cups of tea and some smokes at the truck stop.

Most people probably don’t appreciate how critical trucks are to supplying their everyday needs. Everything from delivering the cars to building the roads they drive on, right down to the fresh produce and iPods at your local supermarket are brought in by trucks. As the placard on many Aussie rigs truthfully declares; “Without trucks, Australia stops”.

Rohan shoots for Truckin’ Life magazine.  Check out more of his work here.