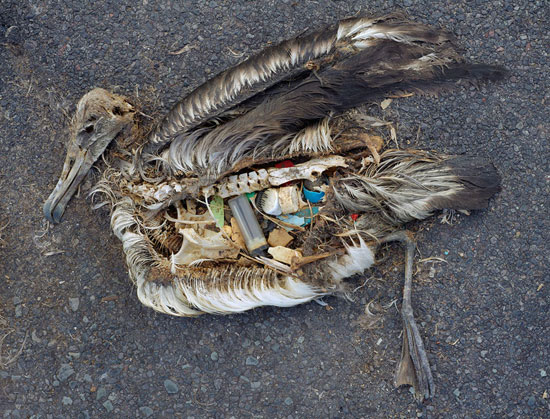 Chris Jordan filming his latest project, Midway: Message from the Gyre. Photo by Center for Ecoliteracy.

My good friend and frequent guest Chris Jordan was named a featured speaker at the Center for Ecoliteracy’supcoming June 2013 seminar in Berkley. First-timers to this space should become familiar with Jordan’s growing body of work, which uses photography and film to capture and make personal the global issues that too often we distance ourselves from.

An on-going project of Jordan’s takes him to the island of Midway — alone in the Pacific more than 2000 miles from the nearest continent — where he has documented the life cycles of the albatross, the island’s de facto official bird. More specifically, Jordan has called attention to the death and suffering wrought upon the species by the trash that washes ashore daily — trash that, as the images show, finds its way into the stomachs of the birds, eventually killing them.

In a recent interview with Lisa Bennet, the director of communications for the Center for Ecoliteracy, Jordan speaks about the path which brought him to the present, about his mission and about his upcoming film, Midway: Message from the Gyre. I’ve grabbed a few of the exchanges to post here, but everyone should take whatever minutes necessary to read the whole interview, here.

Says Jordan of the albatross:

Their eyes, like those of eagles, are piercing and gorgeous. They’re huge and stunningly graceful, elegant creatures. They’ve been living on Midway for four million years and never had a predator. So they know no fear. You can walk right up and get so close that if they wanted to, they could peck at your face with their beaks. I got to witness and film babies hatching. And as I went and witnessed this, I realized there was an environmental tragedy happening there, and it was wrapped up in this envelope of exquisite beauty and joy and grace.

The carcass of a dead albatross reveals the cause of death. From Midway: Message from the Gyre.

Jordan’s reverence for the bird speaks to the importance that we, as photographers, can weave a greater sense of truth into our work when we regard our subjects with such respect — and even love. Later in the interview, we discover that much of his love for the albatross grew from an unfortunate incident on the island, which found him holding the remains of a baby bird:

That was a moment when I accidentally killed a healthy albatross myself. There were so many on the ground, and I ran over one with my bike. I jumped off and immediately got down and looked at her; she was gasping and choking up a bunch of orange liquid. She tried to move, and I saw that both her wings were broken. I think my bike had passed right over her body, and she suffered internal injuries. She took four days to die. I visited her over and over. It was an astonishing experience to discover how much it impacted me that I had inadvertently taken the life of this beautiful, innocent creature. I felt a depth of grief I never thought I had in me, for one bird on one island I never thought I would visit. I discovered that I had this tremendous amount of grief over this one little life I had taken, but there was really nothing more beautiful or lovable about that one bird than any of the other albatross on the island. I discovered that somewhere hidden in my heart, I must have that much love for every one of them.

Get over and read the full interview. And don’t forget to check out the trailer to Midway, which comes out later this year.

Re-watch my ChaseJarvisLive interview with Chris Jordan in 2011 and read up on our previous coverage of Jordan’s work.