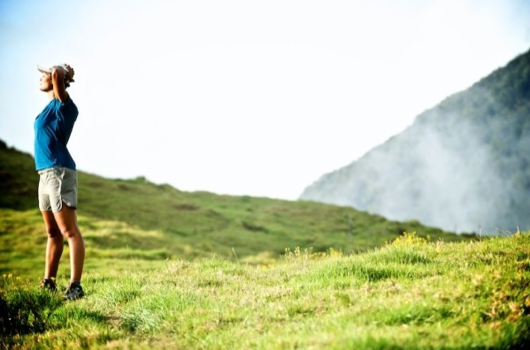 It was fun reading all the great attempts to deconstruct the photo from Monday’s post. As you might imagine, many of you got close or even nailed some of the components, and many of you were way in left field. And that’s exactly what I expected, especially since this image has some tricky, unexpected stuff going on.

At any rate, here’s the debrief:

Concept: this image is really a snapshot. I confess to liking it quite a bit, but at it’s root, it’s a lighting test for a campaign image that’s just about to happen moments after this image was snapped. I was taking pictures every 30 seconds or so as the sun was bouncing in an out of the clouds low on the horizon. I was looking at how the light was falling on the ground, creating the dramatic shadows behind her, and examining the difference between full sun and the partially diffused sun to make a choice with the AD and the CD as to which would be better for our shot. When Chloe faced the sun, I saw this cool shot, and so I snagged it. It’s a “just” lighting test outtake, and there are 30 others that look really similar to it, but it’s a wonderful little moment here with her arms behind her head, facing the sun.

Location: we’re pretty high in the mountains on the big island of Hawaii. The smokey looking stuff in the background is…[click the ‘continue reading’ link below] —
…just a cloud bank, settling between the hills. During our scout, we’d noticed this phenomenon and we’re hoping we’d get it again on the shoot day. We got it. As is said in some circles: location, location, location.

Lighting: all natural. Sun is near the horizon in the evening, just poking out from behind a substantial bank of clouds. The fact that there seems to be no shadow can be explained either by the our altitude relative to the setting sun, or due to the camera angle and the rough grass behind her and we’re just not seeing it.

Post processing: Aperture only. No Photoshop. No composites. We tweaked exposure, contrast, blacks, clarity, cooled down the temp, and vignetted the corners just a touch to enhance the in-camera vignette that the 70-200 lens creates when it’s at its upper range. Total post processing time: 1 minute.

My direction: none. Well, almost none. I’d asked model Chloe to merely stand in her shot while I chimped away at the back of my camera with some lighting tests. She’s waiting for the “real” action to get started when we determine that the light is doing what we want.

And voila. There you have it. A high 5 to everyone who contributed. Since there was over 100 comments less than a day, seems like this is something we’ll do again at some point.

There’s a million things to take away from this exercise, some obvious, others not so obvious. Love to hear some of what you’re taking away if you care to share.