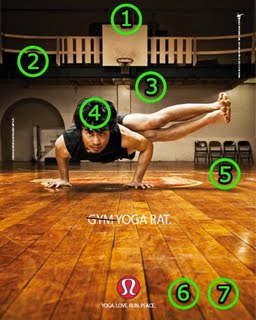 It was good fun poking through all the great comments as hundreds of y’all deconstructed the advertising image I posted on Tuesday. Tons of great insights, lots of great ideas I didn’t use (but might next time) and, while it was a tough choice, I think J. Harrington was the first person who most accurately pulled apart the technical aspects of this image. We’ll send him a signed book or something fun. In the meantime, here’s the de-brief. Numbers on the image sorta correspond to the numbers below:

[Update: I also posted a jpg of the RAW image with no post production after the jump]

1. Overhead lighting. Indeed the image was strobed. In this case we fired a Broncolor Scoro A4s pack with 2 heads and PAR reflectors through a 12’x12′ one stop silk, parallel to the floor and cranked overhead at about 10′ using some beefy stands.

Why? This creates a huge light source and the falloff in the corners of the gym (and in this case, our shot here) which simulates the sorta crappy light that gymnasiums from this era almost all have…sorta bright enough in the center, but mediocre to crappy everywhere else. We overemphasized this a bit as well to add to the drama of the image. This gym was pretty dark, so creating this really big source of light was quite important.

2. Fill light. Most of you were correct in nailing that there was a second light source above the model and camera left. In this case, we fired the Broncolor Mobil A2r pack using one head equipped with a beauty dish.

Why? This helped bring out some definition in the model’s musculature and cheekbones–toughed him up a bit–and …[more details along with a larger version of the image after the jump. —

…at the same time bounced a little light off the floor back up onto his underside, giving us a more light-balanced image. This was especially helpful given that he’s wearing all black and was sorta ‘muddy’ before we did this.

3. Lights on the wall. Would have been a miracle if you guessed this part…Most of you made a smart guess that we fired some small flashes there using Pocket Wizards. In reality, those lights were a part of the gym and were hard mounted to the under-ceiling (note the conduit on the wall). We simply removed the actual fixtures in post production, but left the light. For good reason, nobody got this…

Why? I like how the lights help define the background space. Plus it was pretty dark under that overhang, would have been muddy without a little lighting help.

4. The Talent. This is a real yogi, doing a real pose, in the actual location. It is not a composite. He held this position numerous times for 10-30 seconds per ‘take’. FWIW, it took us a bit of work to find a posture that had the balance, power and grace that this posture did. There was another yogi on set who helped us work through a number of possibilities. We finally agreed to this one based on how aesthetic and strong it was, plus it allowed us to really frame him up nicely on that back wall and above the chairs.

Why? In my opinion, it’s almost always better to create the image ‘in camera’ if possible. In most cases, if the activity in the scene is humanly possible, a little extra work and perhaps even costs on set on the front end of creating the photo can save dozens of hours–and likely some money–in post production afterward. Exception are numerous, but I tend to default to this mentality when appropriate. In this shot, he would pull himself into the posture and I would fire off 10-20 shots while coaching his facial expression, then I’d give him a break. We did this about 10 times, tweaking different aspects of the shot to get the one we finally wanted. This Yogi was a stud.

5. The scene overall. Yes a lot of you picked up on the intentional styling…Mostly on the symmetry and balance of the shot. For example, the four chairs balancing out the four steps. The red circle on the gym floor and the LuluLemon logo, etc.

Why? D3x is a no brainer for single strobed shots. Lots of megapixels if we need to drill in on something, great dynamic range and high ISO capabilities. I chose the exposure so as to grab a little bit of ambient light, but not too much. Mostly I gauged the exposure off the walls under the hoop. I wanted to catch the lights on the walls at a certain level that read ‘grungy gym’. We then built the rest of the shot around that exposure. f5.6 gave me all the depth I needed for the subject and allowed the foreground to go outta focus for the logo, and the background to go outta focus to help set off my subject but still get a solid read on the environment.

7. Post production. We cranked this thru Aperture to generally make it moody and grimy and then did some blemish fixing–and some blemish enhancing (floor, hoop, etc)–in Photoshop.

Well, there ya go. Congrats again to J. Harrington for getting close, and a shoutout to everyone who shared in this. If you like these, we’ll keep doing ’em, just let me know below.

Also, if there’s anything you’d like to know about the shot that I didn’t reveal here, ping me and I’ll do what I can to share some more.