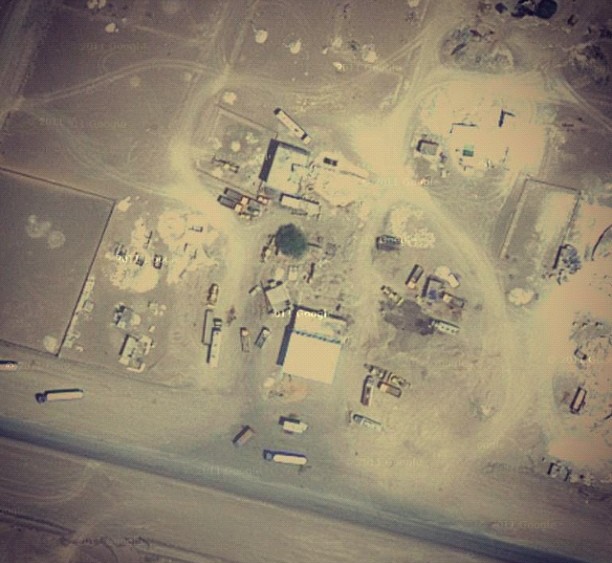 Just how history will judge our country’s use of drones in the “War on Terror” is not for me to decide. I’m not going to to wax political or to publicize in which direction my moral compass points.

What I can do is show you how this powerful machine of war is being seen by a handful of artists around the world. Through these representations we find perspective, and with each new perspective we can consider ourselves better informed to then pass what judgment we will. Or in my case, won’t.

James Bridle is a writer, artist and publisher residing in London, UK. Using records of drone strikes drawn from the Bureau of Investigative Journalism, Bridle has compiled images from Google Maps Satellite on Instagram of strike sites, which include locations in Pakistan, Yemen and Somalia. The collection images — of cities, towns, villages and roads — is Bridle’s attempt to “[Make] these locations just a little bit more visible, a little closer. A little more real.” Bridle calls this collection Dronestagram.

In another related collection entitled “Under the Shadow of the Drone,” Bridle and friend Einar Sneve Martinussen chalked out 1:1 representations of the MQ-1 Predator drone on the pavement of a parking lot in London.

He then did another in Istanbul, in front of a Greek Orthodox Church, whilst in the city as a participant in Adhocracy.

Says Bridle of the drone:

The drone also, for me, stands in part for the network itself: an invisible, inherently connected technology allowing sight and action at a distance. Us and the digital, acting together, a medium and an exchange. But the non-human components of the network are not moral actors, and the same technology that permits civilian technological wonder, the wide-eyed futurism of the New Aesthetic and the unevenly-distributed joy of living now, also produces obscurantist “security” culture, ubiquitous surveillance, and robotic killing machines.

Finally, there is this moving dock-drama by Israeli artist Omer Fast, in which an interview with a drone operator is juxtaposed over a dramatization of the story he tells. No more summarizing from me. Watch. It’s worth the ten minutes out of your day.

5,000 Feet is the Best from Commonwealth Projects on Vimeo.