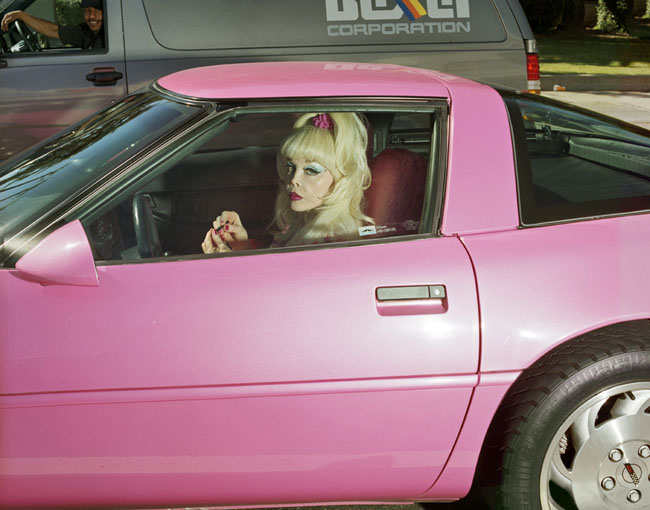 If you’re up for shooting something this weekend, I’ve got an assignment for you. Read on.

Backstory: Between 1989 and 1997 photographer Andrew Bush made hundreds of pictures of people driving. They became a book. That book blows me away – I’ve probably given 10 or more copies as gifts (even blogged it a while ago). But that’s not my point…

The images are concurrently insightful, evocative, even hilarious on occasion…overall incredibly amusing to peruse, not least because many were made in…ahem…Los Angeles.

Woman waiting to proceed south at Sunset and Highland boulevards, Los Angeles, at approximately 11:59 a.m. one day in February 1997

Man heading south at 73 mph on Interstate 5 near Buttonwillow Drive outside of Bakersfield, California, at 5:36 p.m. on a Tuesday in March 1992

High school students facing north at 0 mph on Sepulveda Boulevard in Westwood, California, at 3:01 p.m. on a Saturday in February 1997

Man possibly returning from college at 71 mph along the Camino Real near San Juan Road at 3:33 p.m. on a Saturday in June 1993

Woman caught in traffic while heading southwest on U.S. Route 101 near the Topanga Canyon Boulevard exit, Woodland Hills, California, at 5:38 in the summer of 1989

The thing about this project, is that it shouldn’t stop here – Andrew Bush and his work needs to be given a tribute, the torch carried on, and this community are just the right folks to do it. As such, here is your weekend assignment: I want to see see more of these drivers through YOUR lens. Here are some tips/guidelines

_Go make some driving pictures.
_Don’t crash your car, have someone else drive while you shoot.
_If you don’t have a car, get off your wallet, spend a few bucks and get a taxi or catch a bus.
_If you can’t do the above, stand at a street corner and pop off your shots there.
_Make a bunch of images and choose the best one or two.
_Post them somewhere with a link in the comments.
_I’ll cough up some gifts, signed books or something, and mail them out if some cool images are posted.

My take is that this is easy and cool – but I want to see your take. So now go forth, pay homage to Andrew Bush, and show us what you got.

[And you can support Andrew and his work by purchasing the book here.]