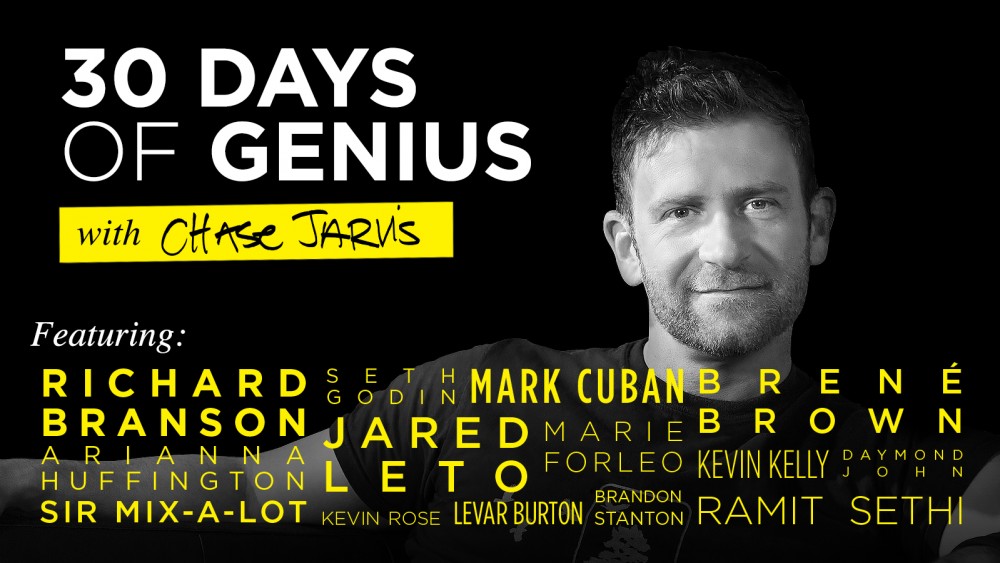 BACKSTORY Today is a big day - many months (years) in the making. Today I'm excited to be kicking off one of the most exciting, inspiring and ambitious projects of my career: a free video series called 30 Days Of Genius. If you've been following me for a while you'll know that chasejarvisLIVE has been a huge undertaking - me sitting down with the world's top creatives + entrepreneurs for an hour conversation with them... read more ›
8.1K reads
Feb 22 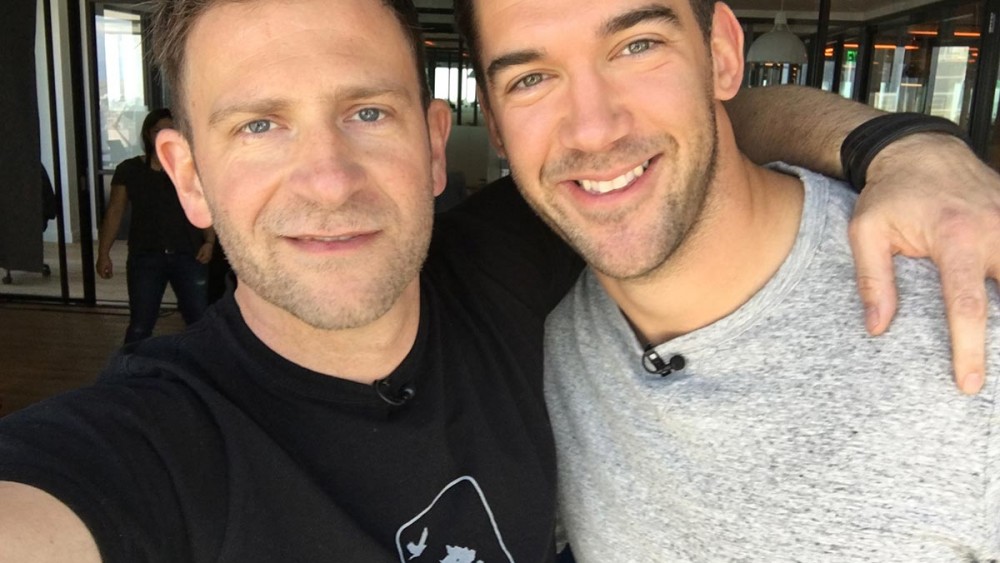 My dear friend Lewis Howes recently asked me a damn good question. If you could - what would you tell your younger self? My answer sucked. But he told me HIS answer and I thought his answer was a good one... So good in fact that I wished I'd had learned the lessons much much earlier in life. I tried to write this in my own voice, but since the list and story weren't mine... read more ›
31.8K reads
Mar 07 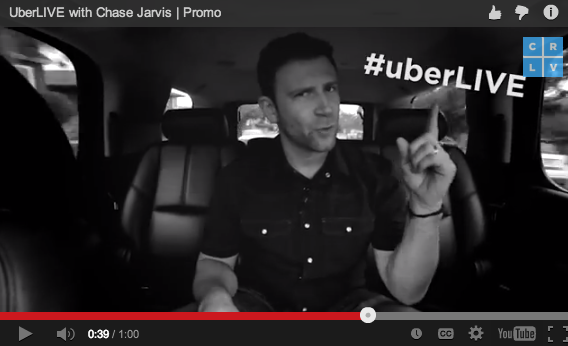 UPDATE: this is TODAY! starting at 9am SEA time (11am Austin, 12noon NYC, 17:00 London) you can join into the conversation with your truly + the most creative minds from photo, design, tech & music. If I do my job right, you'll get more insight in a weekend than at a semester of any college - all from people who have found success. LIVE at www.creativelive.com/SXSW. Ask questions all day at #UberLIVE or... read more ›
328 reads
Jan 07 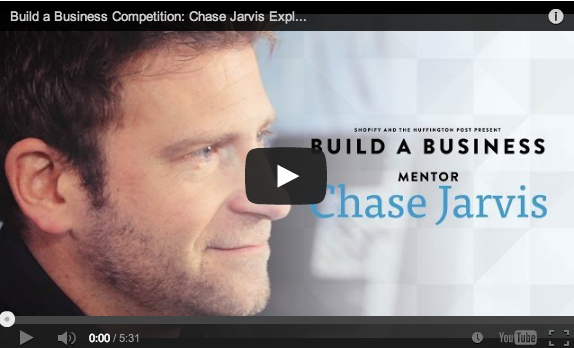 UPDATE: WE HAVE A WINNER!!!! Shopify's Build a Business competition is OVER and THE WINNER IS… Kevin Mack of Tatsup! For more information on Kevin and Tatsup, head to Shopify's blog post announcement. Needless to say, I'm stoked to be able to be able to bring him to NYC, slap a chunk of change into his hand, and give him my advice every step of the way (or for as long as he... read more ›
758 reads
Sep 18 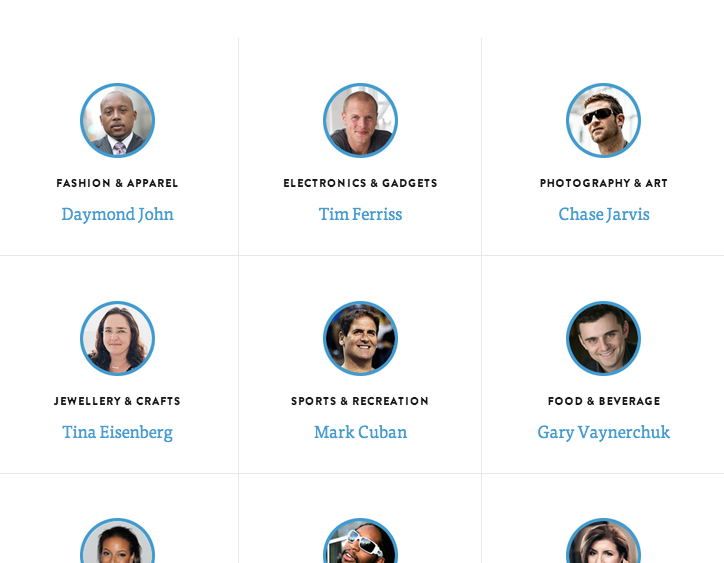 I'm not much known for just dipping my toe in the water. And this is no exception. "It's gotta be real money and real access" I said. "How about $50,000 cash, plus a trip to NYC to receive your mentorship and spend some quality time with you." "Um. DEAL." An that's how it went down on the phone with my friends at Shopify, the powerful e-commerce website solution that allows you to sell... read more ›
736 reads
Aug 21 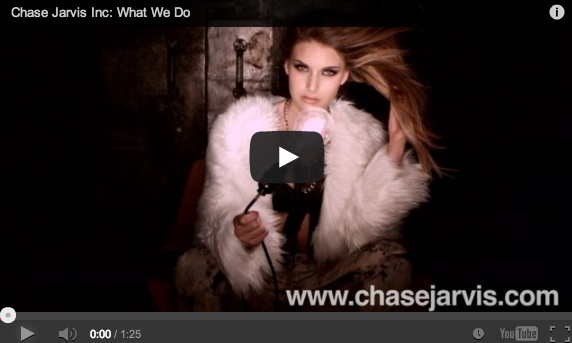 Yes! We just wrapped up my newest brand reel - What We Do. The goal with the video was to invoke more than just the work --- because we know it's the work plus the people, AND the ideas that matter. This one represents the last 18 months or so of jobs and personal work in more than 12 countries around the world. From sea to sky, great angles to Great White sharks,... read more ›
427 reads
Jul 29 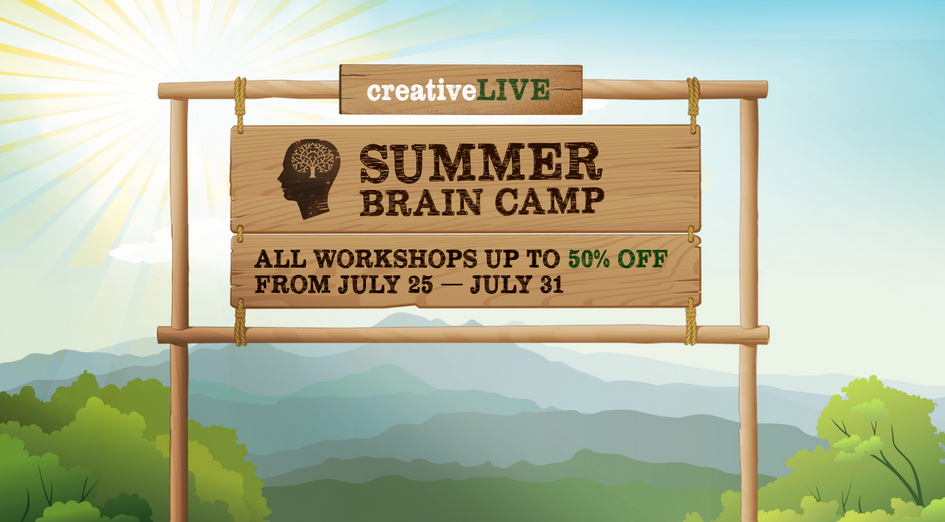 This is a public service announcement that I think is valuable... I'm banking you know I'm co-founder over at creativeLIVE - where we've delivered more than 15 million viewer hours of creative education worldwide. (If you're new, here's stories about it in the New York Times, the Wall Street Journal, The Chicago Tribune, TechCrunch, AllThingsD, etc and stay tuned for my MSNBC segment coming in 2 weeks...) This is a short-notice opportunity to take advantage... read more ›
597 reads
Jun 19

UPDATE: 5 bonus winners!!  Five folks have won a free download of Secrets from Silicon Valley featuring Reid Hoffman, Tim Ferriss, Guy Kawasaki --all who have profoundly influenced my career-- plus many other great business minds. Congrats to: Nelson Mouellic Bob Fisher Brian Bulemore Rodrigo Figueras Tony DiMaggio Winners: email production@chasejarvis.com to claim your prize. AND... Tune in  LIVE RIGHT NOW. Guy Kawasaki is coming up next. UPDATE: Huge thanks to the 500 or so... read more ›
869 reads
Dec 07 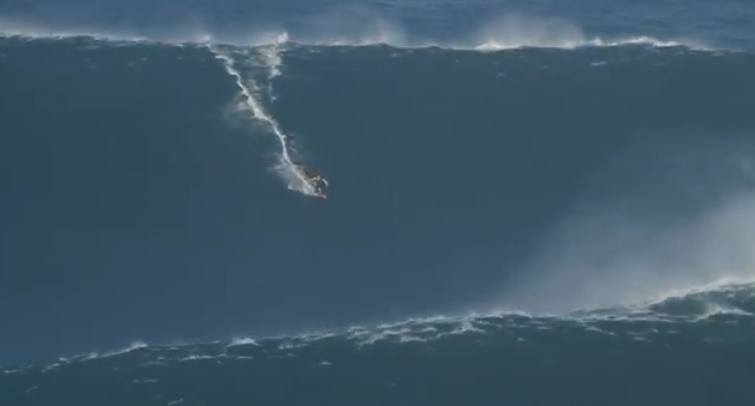 Surf fans have likely already seen the video of Garrett McNamara, a 44-year-old Hawaii native, breaking the Guinness World Record for largest wave every ridden. Caught in Nazare, Portugal, the wave was measured by an independent panel of experts at a jaw-dropping 78 feet. Apparently McNamara almost missed out on this wave because he was so exhausted from the previous day of riding waves that, according to the professional surfer, "were a little... read more ›
1.5K reads
Nov 19 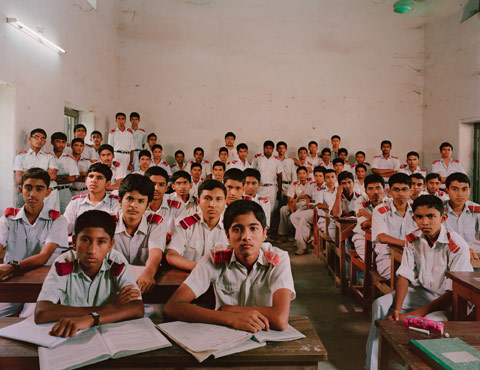 If you come around these parts often you know that I have a keen interest in education. The fact is, in order to find success in a creative career or otherwise, learning what's most important and executing against it is critical. In short, if you want to kick-ass at your job, hobby, passion, life... you need to learn how to learn (see my homie Tim Ferriss'... read more ›
1.2K reads