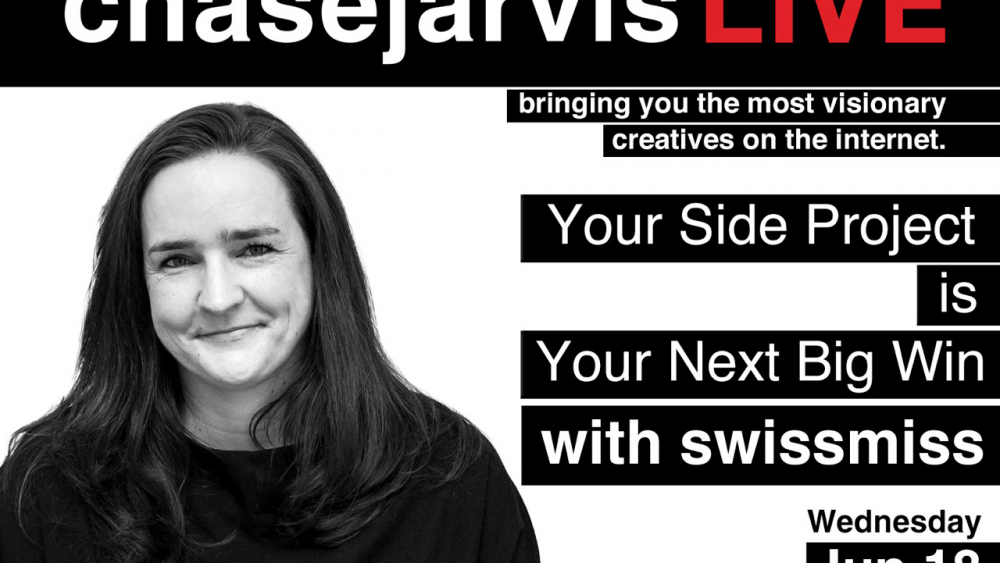 Hey, y’all, this show already wrapped on June 18, but you’d do yourself a huge solid to catch the re-watch on Youtube below or on the CreativeLive website here. Thanks as always for tuning in, and to be the first to learn about upcoming cjLIVE episodes, make sure to sign up for my weekly newsletter right here.

ENTER: Swiss Miss. Tina Roth Eisenberg (aka Swiss-Miss.com) is a force of nature who knows that “your side project is your next big win” more, better, bigger, stronger than anyone I know. Tina’s blog has been an inspiration to me since 2005 and was one of the original blogs I referenced when deciding to start my own…way back in 2006. Put bluntly, Tina is one of the reasons I got started sharing online…and NOW she again leads by example, having created probably a half-dozen business WHILE SHE’S BEEN A DESIGNER WORKING IN THE TRENCHES! Funny thing? Those businesses are now global powerhouses in their own right. AND she’s coming on #cjLIVE next week to tell us all about it.

Moreover, we’ll be LIVE from Design Week San Francisco in collaboration with the AIGA to bring you this amazing look into one of the most progressive creative / entrepreneurship minds on the internetzz. Ever heard of Creative Mornings? That global series of breakfast lectures for creatives – now in nearly 100 cities worldwide? That’s Tina (btw here’s my CM talk comparing Macklemore with Ansel Adams). Ever heard of Tattly? The hottest, most playful temporary tattoo site on the planet – doing exlusive deals with MOMA and designers like Sagmeister? That’s Tina too. Or maybe you’ve used a little tool called Teux Deux to plan your day in lists. Yep – Tina. Co-working space in Brooklyn called StudioMates way before co-working was cool? That’s Tina too. It just doesn’t stop – nor does she. And she’s coming on #cjLIVE to give us all her secrets. Taking your questions via #cjLIVE, live on the day of the broadcast – a global gathering of creative people. An all-access discussion and interactive Q&A. Get the deets here:

WHO: You, Me, creative phenom Tina Roth Eisenberg + a worldwide gathering of creative people
WHAT: Interview, discussion + a worldwide Q&A
WHEN: Wednesday, June 18th, 12:00 noon SF time (3:00pm NYC time or 20:00 London)
WHERE: Tune into . It’s free — anyone can watch and we’ll be taking YOUR questions via Facebook and Twitter, hashtag #cjLIVE

At the bottom of this post, I’ve included Tina’s SXSW keynote that should give you a good idea of what she’s all about, but here’s a list of just a few of the details we’re going to try to cover in our 90 minute episode next week:

MY THOUGHTS ON PERSONAL WORK??? Let’s face it – you know I’m a diehard advocate of personal work. Most of my biggest career accomplishments beyond nailing a good campaign here and there – certainly the biggest game changers for me — have been “side gigs” that have become either huge or at least interesting – occasionally both. Sharing behind the scenes photos/videos/looks into the ‘black box’ of photography (back when there was no such access) helped put me on the map. Best Camera – the first photo app to share images to social networks, recognized as ‘app of the year’ in Wired, iTunes, Macworld, the New York Times and helped kick off the mobile photo sharing craze was a side project born from a desire to share MY photos with the touch of 1 button. CreativeLive was a side project cooked up on a whiteboard between myself and my co-founder Craig Swanson. Turns out there’s a pattern to this stuff and turns out you can and should be cultivating these so called “side gigs” or “side hustles” or “passion projects” because they have tremendous power to catapult your career, your beliefs, your life into a whole new realm.

SHARE THE SHOW AND WIN BIG.
If you’ve watched #cjLIVE before, you know how we do! If you’re new around these parts, well you’re in for a treat… We’re giving away $200 in CreativeLive course credits to TWO lucky winners!

Enter to win by promoting the show as many times as you can starting RIGHT NOW till the show begins. Send out a creative tweet OR Facebook post including #cjLIVE + @swissmiss + any url pointing to THIS blog post. Be sure to use the hashtag and/or point back to my Facebook so we can track all your entries. We’ll select 2 of the best ones and give you a shout-out at the beginning of the show, along with access to the $200 creativeLIVE credits.

WE WILL ALSO GIVE AWAY MORE TASTY PRIZES DURING THE SHOW… but you gotta tune in to the show to find out what we’ll be giving away in real-time! I know, it’s a tease. But you’ll be glad you tune in no matter what.

JOIN US IN THE STUDIO.