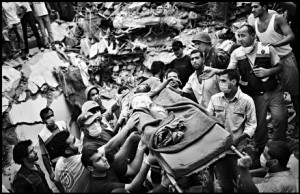 LEBANON. Beirut. August 2006. Rescuers try to remove bodies from the rubble of an apartment building that was destroyed by Israeli bombing in south east Beirut. At least 20 people are dead with more bodies being pulled from the rubble. this is the closest to the heart of Beirut that Israel airstrikes have come thus far.