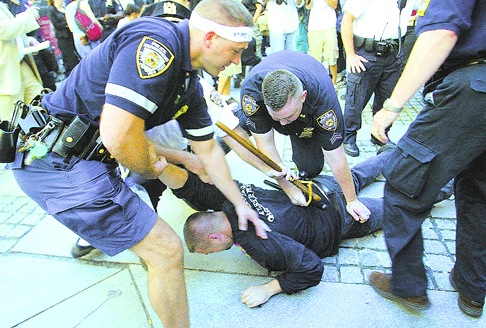 You’ve probably heard about the New York Times photographer who was arrested and allegedly beaten by New York City police officers last Saturday night. There’s a lot of knee-jerk reaction going on out there on the internet about this story. We decided to take a look at it ourselves and go to one of the sources – the photographer himself – for more information. So far, the NYPD has not responded to phone calls and emails, directed in good faith at the Department of Public Information.

The photographer, Robert Stolarik, 43, who has worked regularly for The Times for more than a decade, is no stranger to intense photography situations. He has covered conflicts in Eastern Europe, the Balkans and South America, as well as general news here in the United States like the D.C. Sniper and Virginia Tech shootings. He was charged with obstructing government administration and with resisting arrest as he was taking photographs of a brewing street fight in New York that involved a teenage girl. Not exactly the civil war in Colombia (he covered that for the NYTimes too), but somehow things went sideways for Stolarik.

The incident was reported by the New York Times here:
“Mr. Stolarik was taking photographs of the arrest of a teenage girl about 10:30 p.m., when a police officer instructed him to stop. Mr. Stolarik explained that identified himself as a photographer for The New York Times and kept taking pictures. A second officer appeared, grabbed his camera and “slammed” it into his face, according to Stolarik. He said he asked for the officers’ badge numbers, and the officers then took his cameras and dragged him to the ground; he said that he was kicked in the back and that he received scrapes and bruises to his arms, legs and face.”

I tracked down Robert Stolarik this morning to ask him a few questions directly and get his side of the story. He sounded a bit tired and frustrated, but gave me an intelligent and lucid account of the events. He came off as a professional photographer, even forgiving, who has been in his fair share of tense situations. He was very quick to explain, and frame his situation as unique, and that our rights as photographers are not a free pass to “do whatever we want” when law enforcement or other officials are performing public service or otherwise doing their job. He has clearly experienced this firsthand many times as a veteran freelancer for The New York Times; however, the events of his arrest, and alleged beating, last Saturday night clearly took him by surprise and have left him shaken and appalled.

CJ: In your words, what happened?

RS: The arrest happened without warning. I was taking pictures of something that was really wasn’t anything shocking for them. There was no police line. Ive been doing this a long time and its frustrating. Im credentialed. They asked for the credential, I’m shooting, the next thing I know I’m in jail and my equipment is confiscated.

CJ: Do you feel your rights were violated?

RS: Of course, but you have to realize that each situation each different. Just because we have this constitutional right doesn’t give us a complete right to do whatever we feel like doing. This needs to be understood. You can’t just stand your ground, in the middle of a police scene, and say, “Its my right to shoot this.” You have to walk carefully every time you show up to a [police] scene. There’s a lot involved. These police officers are trying to do a job too. Everyone needs to understand that. I always try to respect that.

CJ: For the benefit of those photographers up in arms about your situation, can you explain what you mean by “respect”?

RS: You want to be respectful of the police officers space as well. We need to be conscious of our surroundings. Even as we’re protected by our constitutional rights – this is important [as photographers] to remember. However, in this case, there is no question that what I was doing was right. I’m never the one to say the picture is more important than everything else on the scene. I wouldn’t want to be responsible for “standing my ground”, and an officer is in the middle of doing his job and [because of interfering] and an officer gets injured as a result of what I chose to do. Just because I have the “right” do take photos. I would never do that. And that is kind of what the police are saying about me. That they have the “right” to charge me with obstruction of government administration. They are using that to say, ‘we can do whatever we want.’ It’s unfortunate because I’m the one who was totally abused. They fabricated these charges. And now it’s them standing their ground on the same kind of idea. I understand they want to protect their officers – but lets be reasonable. Im not saying that they are deliberately fabricating things – but this just didn’t happen. It’s absurd. And no one is trying to make it better. This is worst part of what they’re doing. No apology. They are just trying to cover their tracks. As an individual its frustrating. Forget being a member of the media or press. As a citizen it’s very frustrating. Its appalling to to my friends, its appalling to my family, its appalling to the next generation of journalists who are coming up to see that I’m not protected as a [NYPD] credentialed photographer who works for one of the largest newspapers in the world.

CJ: Is this an anomoly?
RS: Such an excessive force of violence, yes, it seems surprising. Im not blaming the force [NYPD] for this. I blame the individuals. And I blame the individuals who are willing go to bat for people who did the wrong thing. It’s upsetting. Im surprised by how extreme it was – but there does seem to be a tremendous amount of animosity toward us for being photographers. For the sake of being photographers. To be beaten up, like Im some guy who is a serious threat to their well-being is incredible. Its unbelievable. That’s the problem with this whole situation.

CJ: What would you like to see happen next?
RS: Im a freelancer at the Times. Ive been there 12 years. [The Times], my colleagues, editors and other reporters have been tremendously supportive. But my main concern is getting back to work. Drop the charges. Give me back my equipment. Even if it’s broken, I’d like the cards to finish the story I was working on. Maybe I can get my press credentials back. Let me go back to work. That’s my focus right now. Maybe I can get my cameras back when I feel better.