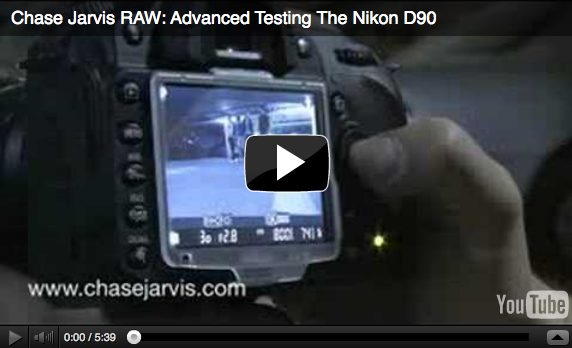 What a year it has been. Thanks so much for spending your precious time here. I’m grateful for the level of engagement from this community and I’m continually invigorated by the power of sharing stories, ideas, and information online. Winding down 2008, here’s a quick look back at some popular behind-the-scenes videos and other posts that had some interesting traction:

Chase Jarvis RAW: Advance Testing the Nikon D90
I was lucky to be the first photographer to work with the Nikon D90, the world’s first dSLR that captured both stills and HD video. This behind the scenes vid showed what that experience was like, kicked off an interesting discussion about where cameras are going, and inspired my pal Vince to make the hit “Reverie” once Canon’s video dSLR finally came home to roost.


Chase Jarvis RAW: Kung Fu (Featuring Superfad)
Highlighting how both stills and video come together in high-end advertising, this behind the scenes vid illustrated my working for superstar motion gurus Superfad to shoot stills that mimicked their beautifully created motion work.


Chase Jarvis TECH: Photo Shoot in 180 Seconds
This vid highlighted every aspect of a typical commercial advertising shoot, and features the lovely ladies of the PGA. From creative concept to production and delivery, this is a front to back, soup to nuts, photo shoot in 3 minutes.

Two more videos and a handful of other top posts from 2008 after the jump. Click the ‘continue reading’ link below…

—
Chase Jarvis TECH: High Speed Photography
Unknown to most photographers, freezing ultra high speed action is more a function of strobe speed/duration than shutter speed. This video uses photo gear, knives, and exploding water balloons to show you how to do this on your own.


Chase Jarvis RAW: Seattle Flickr Roundup Redux
A followup to the first large scale meetup of its kind that we created in January, this second event from summer was the underground photography community on steroids. With help from the community, we organized a hundred aspiring photographers to have access to professional equipment, 25 models, 4 stylists, wardrobe, breakdance crews, S&M mistresses, skate and bmx ramps and a 30,000 square foot studio. I was hung over the next day 😉

Now some other popular non-video posts from 2008:

New Project: Songs for Eating and Drinking. An ongoing project I’ve co-created putting some of the world’s best known musicians (eg. Pearl Jam) at a dinner table with some of the hottest emerging indie bands (eg. The Saturday Knights). Stills, video, and audio of the evening to share with the world.

Red with Envy. Its no secret obsessed with still/video convergence. Here, camera maker RED announces a modular DSMC (digital stills and motion camera) to the world. Imagine 48 megapixel stills at 120 frames per second.

Secret to Success in Photography. Some people loved it because it helped outline a clear path for becoming an expert professional photographer, others hated it because they don’t see it the same way I do and want a short cut.

Will Work For Free? Launching a discussion about pro-bono and other unpaid work. This whole idea tore thru the photo blogosphere like a headless turkey round the barnyard.

Introducing My First Book: Stevens Pass. In mid October, I released a self published, limited edition hardback book highlighting a collection of skiing and snowboarding images from Stevens Pass. Printed 2500, just a handful remain if you’re at all looking. Thanks for buying ’em all up.

Free Trip to ASMP Strictly Business. In an effort to highlight the importance of good business in photography, I held a contest to cover airfare, hotel, and/or entrance fees for a handful of photographers from around the world to be able to attend the ASMP Strictly Business conference in Chicago. More than 500 comments poured in in day or two, and the stories behind who wanted to go, who got to go and why, are chronicled therein – worth the read.

Chase Jarvis: ROOM WITHOUT A VIEW. A series of blog posts throughout the year that help illustrate what life on the road is like. Every so often I took a snapshot out my hotel window and readers from around the world chimed in to identify my exact location. Once the location was revealed, I posted a handful of behind the scenes snapshots from that location. People, you scared me with your accuracy. Nailed my location every time, sometimes down to the exact square foot or hotel room. More of this in 09.

Be My Editor. Nearly 250 commentors “edited” my work in less than 24 hours. Some interesting results, criticisms and discussions.

Thanks again for visiting. Prepare for the hangover, be safe, and we’ll all cross paths again in the new year.