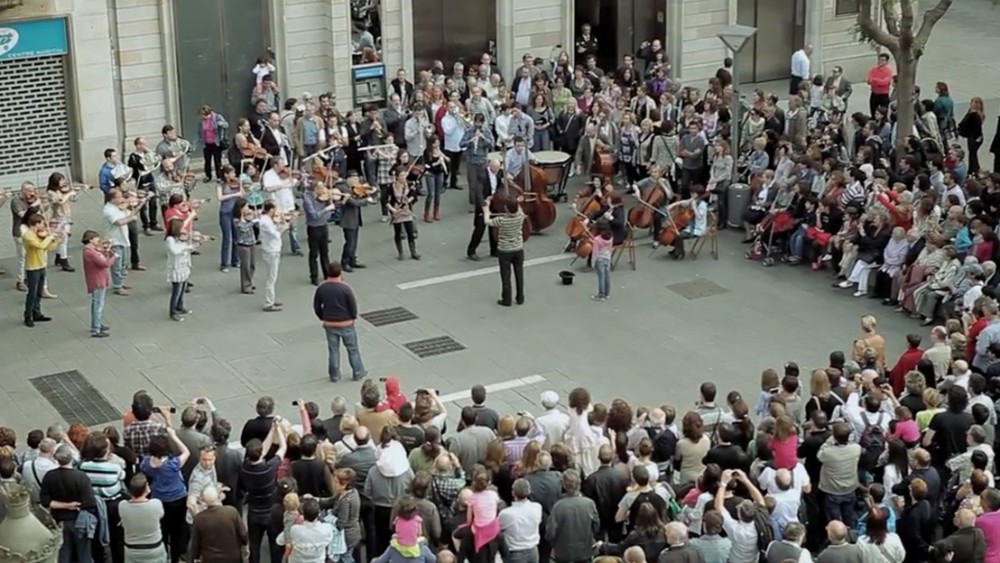 There’s one thing about classical music that I’ve always believed: it is far better to see it performed than to hear a recording of it. While this is true for just about all kinds of music, the multi-layered nature of classical compositions (especially pieces that call for large orchestras) make it even more suited than normal for in-person performance.

And when those performances take place in public, the experience is all the more radical. Breaking out of the confines of concert halls with perfect acoustics and controlled environments into the chaos that is a flashmob, these are six of my favorite classical performances from all over the world.

Ode to Joy in Catalonia

One hundred people from the Vallès Symphony Orchestra, the Lieder, Amics de l’Òpera and Coral Belles Arts choirs came together in a square in Catalonia, Spain, to perform Beethoven’s Ode to Joy. The whole thing was beautifully filmed and as flashmobs go, ranks up there with the best of them.

Peer Gynt on a Metro

The Coopenhagen Philharmonic surprised metro passengers with a performance of Edvard Grieg’s Peer Gynt in a fairly crowded compartment. The looks of sheer pleasure on many of the passengers’ faces is just as entrancing as the music.

The Coopenhagen Philharmonic apparently likes this sort of “art in the public sphere thing. Here they are again, with a performance of Ravel’s Bolero.

Tchaikovsky and Vivaldi in Indy

Lest you think all good things only happen in Europe, we present a string company from the Indianapolis Symphony Orchestra, rendering a masterful performance of pieces from Tchaikovsky and Vivaldo in the Keystone Fashion Mall in Indianapolis. Classical music in the midwest? For. The. Win.

The Canadians Handel Business Too

North of the border, our Canadian cousins got a nice surprise when a bunch of vocalists jumped up in a mall food court and belted out Handel’s Hallelujah chorus.

… and back to Europe

Those Europeans may not have all the classical flashmobs, but they seem to have some of the best. We close this list in Vienna, Austria, where Solistinnen, Chor und Orchester der Volksoper Wien renders an absolute stunner performance at the Westbahnhof Wien. Carl Orff’s Carmina Burana has been performed often before, but I doubt those performances had dancers who went undercover as janitors or rail officials.

Do you have a favorite performance you’d like to tell us about? Sound off in the comments, let us know!