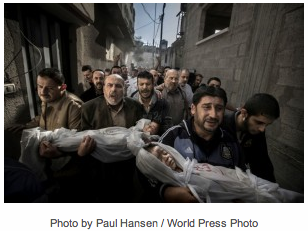 Paul Hansen of Sweden had his moving photo of a group of men in Gaza City carrying the bodies of two dead children selected as the 2013 World Press Photo of the Year. The photo, taken on November 20, 2012, was captured as the group was transporting the bodies to a mosque for a burial ceremony. The boys — two-year-old Suhaib Hijazi and his older brother Muhammad — were killed when their home was hit by an Israeli missile strike. Behind the first line of men you can make out another body being carried, that of the boys’ father.

The jury-selected photo was announced as the winner this past February 15. I’ve been struggling with whether or not to call attention to this photo and several other “war & conflict” winners since that date…not because they’re not worthy, but because I’m human and this stuff carries powerful emotions on board.

“The strength of the picture lies in the way it contrasts the anger and sorrow of the adults with the innocence of the children. It’s a picture I will not forget.”

I can’t forget it either – and nor can I forget so many of the conflict photos I see.

Certainly I know intuitively and also as you — this community of photographers — underpin this for our community every day… when featuring, sharing, “dealing” with war and conflict photos we have to treat them with a special reverence. [Sometimes those lessons are learned by fellow bloggers are witnessed by all of us…] For me, even the notion of selecting an image like this as a “winner” of anything makes me grimace – at a fundamentally human level. Certainly the timing and narrative of the image is of the highest quality, and, granted, the Press Photo Contest is not intended to glorify war and conflict or rejoice in the subject matter it presents, but deserved as it may be, given it’s many merits, I struggle to shake the image of a blue ribbon pinned to the bottom right corner of Hansen’s photo –or any such photo– because I’m human.

I, when pushed, can separate the work from the unpleasant message, and I’m able to champion the line “these images deserve to be seen by the world” but it’s always a struggle for me to take these in… And while I’m not a photojournalist by trade, we’re all photographers and related somehow by the power of the image, and we know that at least one of us can’t leave moments like these alone. So we do as Mohanna does, and we take the shot. For better or worse. For the spread of awareness or the spread of violence.

The rest is up to the global discourse.

[Fortunately, the World Press Photo Contest picks winners across nine categories – not just War and Conflict. So while I’m most moved by the war & conflict material, I’ve highlighted a selection the First Place Winners below. But don’t substitute just these photos for the full array of work here on the WorldPressPhoto.org site. They’d love for you to visit them, and so would I. Hats off to them and the photographers worldwide who immerse themselves in this work.]