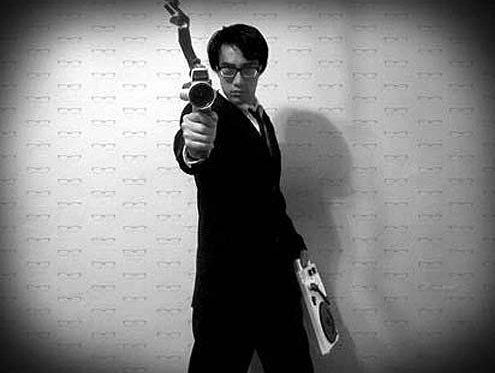 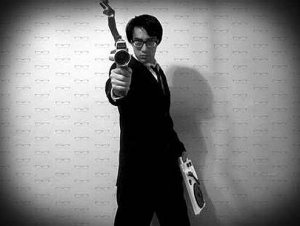 UPDATE: if you’re reading this post now…The no “Talent Imitates, Genius Steals – REMIX” edition of #cjLIVE with one of the world’s leading multimedia (audio + video) DJ’s Mike Relm is TODAY 11:00 Seattle Time, 2pm NYC, 19:00 London! Tune in here to the live page to unlock your creative mojo and realize that inspiration is all around you.
———
There’s a saying that you should understand. It’s “TALENT IMITATES. GENIUS STEALS.”

Now before your undies get in a wad, I’m not saying steal work and pretend it’s you’re own. More deeply, I’m asking a question. Do you want to understand and set free your most creative work? Then pay attention here. And mark my words: the REMIX is the single most important artistic concept of our time [Go ahead and read that again. And read all the way to the bottom if you want to win a Polaroid Z340 instant digital camera…]

In truth, I didn’t really understand this until I met THE remix king himself, MIKE RELM. If you’re familiar with Relm’s work, then you’ll know why he’s the very important guest kicking off our 2012 cjLIVE season this Tuesday, February 7th on chasejarvis LIVE. Mark your calendars – you will not forgive yourself if you miss this episode, especially because (apologies in advance…) the performance portion of the show–Mike ripping it on the 1’s & 2’s–can’t be rebroadcast based on music licensing. (irony noted 😉

Who: You, Me, Mike Relm & a worldwide gathering of creative people
What: Q&A plus a LIVE PERFORMANCE remix legend Mike Relm
When: this Tuesday, Feb 7th at 11:00am Seattle time (2 pm NYC time or 19:00 London time)
Where: tune in to www.chasejarvis.com/live. It’s free – anyone can watch.

In the unlikely even you’re not familiar with Mike’s work, he is a director, a DJ, a producer and live performer like you’ve never seen and he’s perhaps more knowledgable about the Remix than anybody in my rolodex. He’s directed mashup music videos featuring Del the Funky HomoSapien, done commercials for Hollywood blockbuster films (like Favreau’s IRON MAN) and Google and beyond, he even performed live at the 2010 Olympics. This episode will slap you around and wake you up to the very real notion that talent really does imitate, while genius steals.

Ditch the idea of yourself as a lone artist out on the plains of oblivion. Throw away the notion that you are your own creative soul. Just like other no-BS, hard hitting episodes, this won’t be a about theories or what-ifs, this will be about how to specifically take stock of your inner dialog, fuse it with pop culture for inspiration, and then make kickass creative work.

1. For some fun and to hype this show, I’ll be giving away a brand-new Polaroid Z340 camera ($300 value) autographed by yours truly, to the the person who follows @chasejarvis and sends out the best tweet that contains the URL (or short url) to THIS post AND hashtag #cjLIVE, starting right now and ending at the beginning of the show on Tuesday. Enter as many times (tweets) as you want – we’ll be watching out for your shoutouts.

2. If you’d like to be a part of the live in-studio audience, meet me and Mike and our cjINC crew, sign up for our email newsletter on the cjLIVE page here AND send an email to production@chasejarvis.com with “Remix” in the subject line. We will invite 30 guests new to our email list to attend the show in Seattle.

See you on Tuesday Feb 7. Please spread the word! [some of Mike Relm’s work, below]