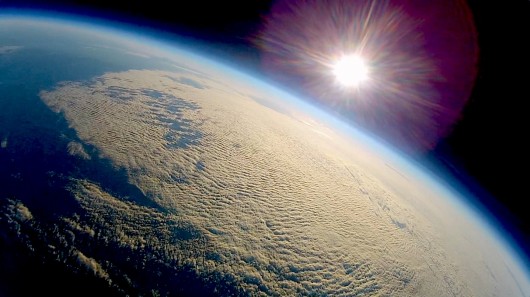 Are you pursuing your personal passions to get the pictures you want, or are you letting…ahem…”too many obstacles” stop you?

Here’s a little inspiration. Using a weather balloon, a Gopro 2, a Multiplex Funjet and some other lo-fi equipment, David Windestål decided to get some first person footage of a trip to space. What he ends up with is an awesome video of the camera’s trip into orbit, and a ton of inspiration for the rest of us. Sure he could massaged the footage and edited differently / better. But whatever. In this post its the spirit that counts. Because truth be told, he’s doing cool shit. And you…?

The takeaway is this: you might not be as handy as David with a soldering iron, but it doesn’t matter, that’s not the point. The point is to stop creating false barriers between you and what you want to be taking pictures of…

Take that project that you’ve pushed off… decided is “too difficult” or “too expensive” or “too [whatever]” and hack into it. If you can find step by step instructions on how to send a camera into space with a couple of mouse clicks, what else might you figure out how to do with a little elbow grease and that good, ol’fashioned get-off-your-ass-and-do-it attitude adjustment?