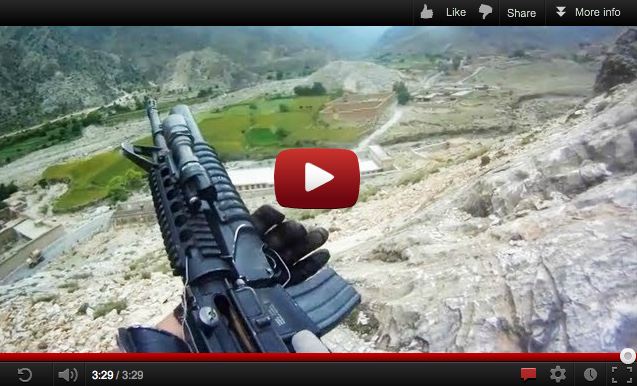 The age of context is upon us.

Last week we featured some POV footage of mind-blowing surfing action. It was fun, sporting and intentionally creative.

The clip above is on the the whole other side of the spectrum. It’s real, raw, and unnerving from the middle of an active battlefield. No doubt, it was not created with artistic purpose. But it captures the context and imagery of what it is like, visually, to be in war. Nerve-rattling and stressful.
Watch as this unknown US soldier places himself in harms way – presumably to to pull Taliban insurgent fire off his squad, pinned down above him, so they could get to safety. He is hit several times (reports suggest his body armor protected him from serious injury) and his exclamation, “Im hit, Im hit,” parks itself in your brain. The soldier’s actions might seem courageous and brave, but some are suggesting that he was reckless and moving into harms way without a plan for cover. I’m not a solider or an expert in fighting the Taliban, so I will leave that debate for others. I’m sure there will be no shortage of opinions.

The soldier is quoted:

“I got a hit a total of 4 times. My helmet cam died and i made it down the mountain on my own. I was also hit in the side of my helmet and my eye pro was shot off of my face.

A round struck the tube by my hand of the 203 grenade launcher which knocked it out of my hands. When I picked the rifle back up it was still functional but the grenade launcher tube had a nice sized 7.62 cal bullet hole in it and was rendered useless.”