Some guesses were getting close-ish, but it seems that I finally stumped you guys on an RWAV. It’s perfect actually. I was starting to think for a while that some of you had a some tracking device planted on me from a scene outta the 80’s dive Tango & Cash.

A far cry from the likes of Paris, NYC, and SoCal, this time the crew and I were nestled at a lodge in the middle of the North Cascade Mountains–technically in Mazama, Washington–which served as a base camp for a commercial shoot involving helicopter-accessed ski and snowboard images. Not a bad gig. Special shout out to North Cascade Heli for their support. And thanks to everyone for playing.

BTW, I love the woods.

Here are some behind-the-scenes snapshots from the trip: We dubbed this shoot “light and fast”. Here’s the crew. Less people, but lots of stuff. En route to North Cascades Heli. 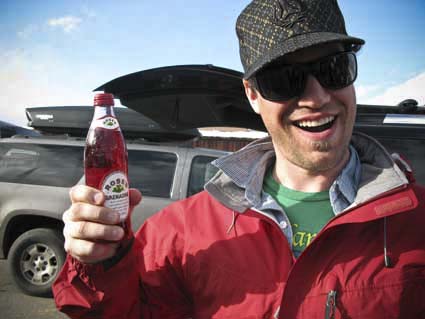 Truth: Nate the snowboard model took a deep swig out of our bottle of grenadine. His defense was, “I thought it was some cool new fruit juice or something.” Question: why did we have grenadine with us in the first place? Further debunking the “only hipster Paris, NY, LA” syndrome that is completely untrue about professional ad photography, here we are literally engulfing the one pizza place in town. Our small crew filled East 20 Pizza. Ryan, the proprietor took great care of us, especially kind of him to stay open on account of our late asses. It was super sweet – check out this joint if you’re ever in Winthrop, Washington. Kate and Mario polishing off some ice cream. Cinder blocks watching from behind. Some crew prepping for the morning’s first heli out… 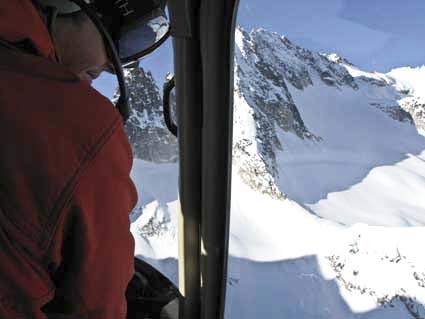 Self portrait, preparing to drop into the slope below. Last heli drop on one of the days. Canon G9 nails the exposure on Program mode. Guides throw rock-paper-scissors to see who gets to take one extra “bump” for fun. Final heli drop, final day. Can’t wait to get back to the North Cascades.

Now, since there are no community urls to share this time around, if anybody is still with me here at the bottom of this post and/or are at all interested in these snap-shot-y documentations of our shoots, I’ll invite you to check out a recent addition to this blog’s behind the scenes stuff: We’ve started a Flickr pool called Chase Jarvis Crew Shots. We’ll be uploading to this constantly – outtakes from my camera, our personal point and shoot’s, whatever. Be prepared: it’s almost entirely un-edited. But then again, for this kind of stuff, that’s pretty much the point.