Okay, THAT was fun. I really enjoyed the hell out of that for a number of reasons: your humor, your cleverness, your brilliance, my teasing the wrong answer out of you, my planted clues your detective-ness, the educational value, and the general gamesmanship. Plus, underneath it all, you guys and gals are really freaking sharp.

Okay, some introductory remarks that won’t be here for future RWAVs, but are worth commenting on now:

1. To those of you that guessed simply “Paris” you were right, sort of. Had this been a more obscure place, like Topeka, Kansas, or Palm Springs, California, just drilling down to the city probably would have been the cake taker. If I post the skyline of Manhattan next time, perhaps try to guess deeper… Regardless, don’t be discouraged, you all kicked ass. That said, read on to see how some folks went the extra mile. (still linkage at the bottom, however, for some of you who hollered Paris!)

2.Loved that many of you thought to check the photo’s title/metadata. That’s an educational/infomercial thought I planted. There is usually info there that can help (or hurt) you. I did consider changing it before posting, but I thought I’d leave it as a test of the group mentality and, more importantly, as a red herring for many of you smarty-pants’ out there who I KNEW would – if combined with a shot of the noticeable pink of Place des Vosges–jump straight for our place in Paris. That’s where I was tricky – 5 Rue de Bearn resides on the opposite side (north) of the square, this was shot from the south.

3. Loved those of you who went the extra mile. Google maps? Photosynth? Flickr? Your own deductions? So cool. HUGE props and so cool. That kind of detail–how you think and what track your on–is going to continue to be a really cool part of this series, forever. Keep it up. Your tenacity will surely be tested in the future however, so don’t get cocky: I will bring the heat 😉

3. Loved that some of you (R=E9mi) picked up that there were other clues online as to my whereabouts (Strobist blog post from 12/30/07). Think about this going forward.

4. Loved Brian Faini’s confidence. He brought the heat, but didn’t perhaps consider that I obviously know what my files are titled (jeez Bri! 😉 and that I could have put that there for as a lead…also that he perhaps underestimated the level of detail other’s would go to….

5. Bummed that some of you who would have been “winners” for your Paris answer plus bonus cleverness, however didn’t leave your url so I could link to you at the bottom of this post. Next time?

6. Loved that many of you knew there was some trickery in there somewhere 😉

7. Why the hotel across the square and not your place in Paris at 5, Rue de Bearn? Good question. Our lease there has expired and we were there in part to address some stuff in storage and get a new office (woohoo which we did and will detail later). Phone numbers are the same and mail will get forwarded to the new addy…

8. I’m already jazzed for the next one of these. Just so you know I’m in Seattle right now, and headed out again on Wednesday, so keep your ear to the ground…

Now for some of the gritty road snapshots I promised: 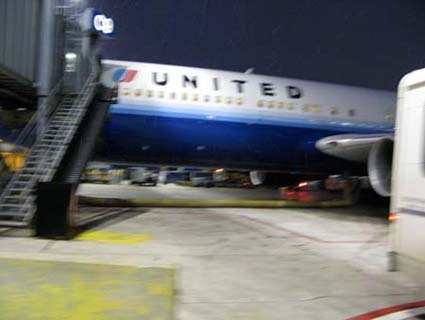 The TSA wants to know why I’m on the tarmac at Gate C9 in Chicago at night while it’s snowing. So do I. Amazing sky while flying into Paris. Pods inside of Gorges atop Pompidou. Architect and good friend Andrew of Build LLC with his wife Angela. Nothing to say about this. This is a one room hotel pod atop a museum. You can rent it for the night. Get in line. Read here.

And if you want to watch a couple VERY short stupid vids from my point and shoot, see a dancer in the streets of Paris on New Years Eve (5 seconds), my cab driver plow over curbs and drive like a crazy person at rush hour (70 sec), see same cab cut off 30 cars at a stoplight and ram more curbs (20 sec).

Winner Lottery Links: And now for the coolest community part… Please go visit these peoples sites – they kicked ass in the first ever Chase Jarvis: ROOM WITH A VIEW. I found some cool nuggets at their site and you should too. You could win next time and I bet you’d love some fresh eyes on your stuff. Grow the photo community.

-Best Detective is Nicolas by far – he gave no url – but if he sends an email and some size/style info to info at chase jarvis dot com we’ll send him a limited edition tshirt.
-I like David’s photoblog a lot.
–Alex Von Boxl gave freakin’ GPS coords! and his Flickr stream does Place des Vosges some justice.
-Marcos almost got my exact room number, missed by one floor and one window over. Visit his site.
–Josh Meador has a cover image that looks a lot like one of mine, maybe better.
–Rob Birrell was on it pretty early…nice shot on his site of a VW under water.

Looking forward to getting on the road again in 48 hours so we can play some more.

Tony Robbins: Transform the Quality of Your Life