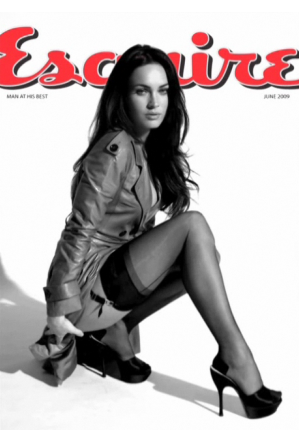 I’ve been yelping about photo and video convergence since long before the Nikon D90 and the Canon 5d, so it’s nice to see the support for these claims just keep on rolling in. For example, Esquire magazine today announced that the June 2009 issue of their rather glorious magazine (on sale May 10) features Megan Fox on its cover, and more importantly, that the image was captured with a video camera. Yes. That’s right the REDone’s 4k image is the first I know of to be sitting nicely on the front cover of a high-end, public-at-large magazine.

I love it. Rather jealous, actually, of photographer/director Greg Williams. I’ve been working with the RED a fair bit in the past year and trying to talk my magazine friends into letting me pull off that move. Nothing doing. Been laughed outta the building in fact. So big kudos to Greg and the Esquire team for taking the plunge and making this happen…

“It allowed her to act,” Williams says. “She could run scenes without being reminded by the sound of a shutter every four seconds that I was taking a picture. As in still photography, a lot of it is capturing unexpected moments. This takes that one step further.”

Surely you have some thoughts on this. Is this the first signs of the levy cracking and will we now see a wave of this? Or is it steady as she goes…

—
Thanks to Justin Abe for the tip, via Facebook. Become a fan.