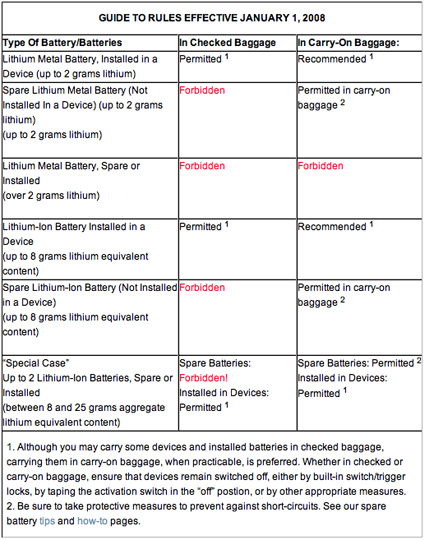 Here’s a tip we didn’t see coming when we posted our Chase Jarvis TECH: Packing Photography Gear post a few weeks ago: It seems that the Federal Aviation Administration and the Department of Transportation–effective January 1, 2008–are limiting the number, size, and location of spare lithium batteries we can travel with…

Chances are that if you’re a traveling photographer, you fly with spare lithium-ion batteries for laptops, cameras, flashes, etc. They’re the juice behind darn near everything. I know that we normally travel with boatloads of these things. I mean LOTS of ’em. But no longer can we: Here’s the official press release for the new rule. By my understanding, this is an FAA/DOT regulation that has to do with the air/flight safety of these batteries and is not a TSA regulation. Quick research has it that lithium batteries are volatile and that if/when they catch fire, they burn HOT. (You heard about those laptop fires and this cargo plane fire…) Reportedly, if they catch fire in the belly of the plane, the mechanism for extinguishing such a blaze down there is insufficient. That explains why they want you to carry just a couple of them on board into the cabin – allowing use of a more effective fire extinguisher in the passenger portion of the plane to put them out quickly.

Experts say this should “not inconvenience the general traveling public” but will most likely affect “photography and video professionals”. That’s us.