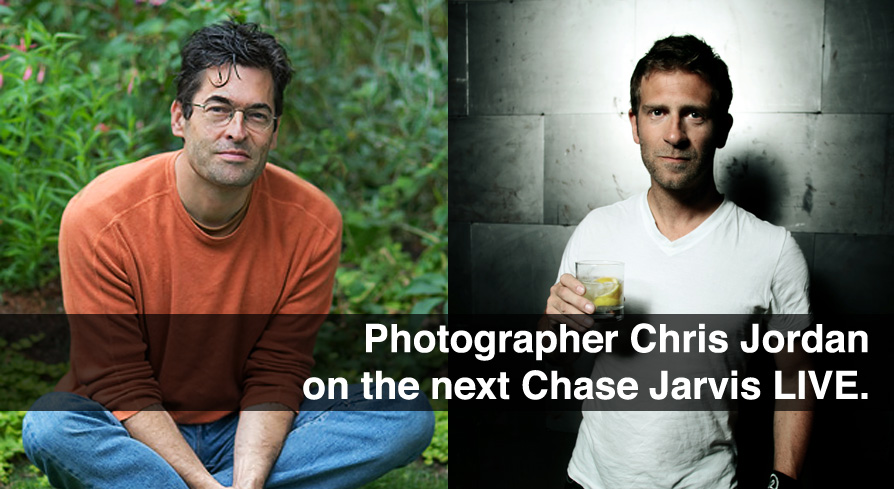 Lots of people would have called Chris Jordan crazy to leave a career as a well-paid attorney to pursue a career as a fine art photographer with a cause-based mission to document the human impact on the world. That is, they would have called him crazy, until they saw his work and the impact that work is having. Gallery shows, museums, speaking gigs, documentary films, and moving the world to action.

That’s why you must not miss chasejarvis LIVE this Thursday, September 8th, where we’ll be spending an hour with Chris. The guy oozes inspiration to photographers that want to make a difference in the world AND–importantly–those people who are stuck in a job that’s not giving them the fulfilled, who want to transition to the creative life that they seek to live. We’ll look at Chris’ stunning work, talk in detail about his meteoric transition from corporate gig to photographer, and we’ll learn a helluva lot in the process. When I posted a story about Chris a few months ago, I know you were moved–I got hundreds of comments and more than 30,000 of you watched the short video clip (bottom of this post again…). This will be an amazing opportunity to have Chris answer your questions during the live show using #cjLIVE.

Who: You, Me, Chris Jordan & a worldwide gathering of creative people
What: Interview and LIVE Q&A with photographer Chris Jordan
When: this Thursday, Sept 8th at 11:00am Seattle time (2 pm NYC time or GMT -8)
Where: tune in to www.chasejarvis.com/live. It’s free and anyone can watch.

***AND, for some fun and so that the show can reach as many people as possible, we’ll be giving away a signed copy of Chris Jordan’s amazing books, Running the Numbers, to those that help spread the word… Specifically, to the two people who send out the most interesting tweet that contains the URL (or short url) to THIS post AND hastag #cjLIVE, starting right now and ending at the beginning of the show on Thursday. Enter as many times (tweets) as you want.

It’s free. It’s live. Looking forward to seeing you and yours at http://www.chasejarvis.com/live on Thursday.