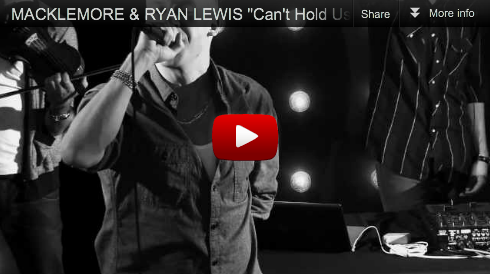 Last year we were fortunate enough to host some great friends on chasejarvisLIVE — perhaps the fastest rising hiphop act in the country — MACKLEMORE & RYAN LEWIS. Today the Seattle duo independently released their latest work: “The Heist.” The effort brings artists like Schoolboy Q and Ab-Soul to the table in a 15-song album. It is their first project since 2010’s re-release of their debut The VS. EP and it is AWESOME. And I’m not the only one who thinks so — they are in the midst of a world tour that has been selling out everywhere. [They will be in Seattle Friday at the WaMu Theater]

They joined me onstage to drop knowledge about staying true to one’s art, the evolution of creativity in a digital age, and more. And as a massive bonus, they followed it up with a fresh-ass LIVE set. We’ve cut the set up into individual tracks – here are four videos of awesomeness from MACKLEMORE & RYAN LEWIS.