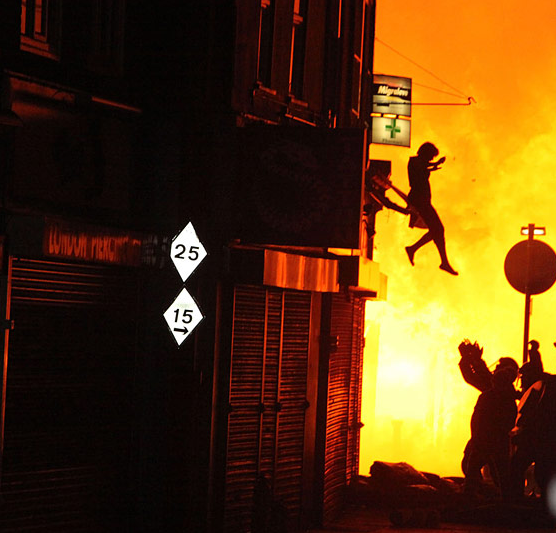 You might recall my recent post in the wake of the London riots, where we discuss photographer Amy Weston capturing a woman jumping from a burning building here. I’ve been in those situations a few of times, even though I’m not a photojournalist by trade and I raised the question of whether I should be shooting or helping. Lots of debate ensued, with the most common answers being grounding in specific circumstances, but I thought you’d appreciate hearing from Amy – the photographer who actually shot the image featured in the worldwide media and here on my blog. Unsolicited, she reached out and…in a stream of consciousness sort of way, she had this to say…[reprinted with her permission]:

Hello Chase how are you? I am Amy Weston and I took the photo of the women jumping at the London riots. I came across your blog, but I could not figure out how to respond to some of the comments posted… [so I emailed you.] Your question was To Shoot or Not to Shoot.

My answer to that is: to shoot!

I live my life looking into my lens, I see a world passing me by and I photograph it.

Although I have said to shoot, I don’t always keep images, I …[sometimes] take the pictures to report a story of sadness and despair, and then I only send pictures of the chaos and the aftermath to a paper to be printed. The rest I delete…

When I went out that night to photograph the riots, I didn’t want to get a picture of looters. I felt fear from them, it was like they had been put on the planet and were of a completely different mind set to the normal sane reality that comes with common human decency.

It was not the London I have shared for 10 years.

In front off me was a burning fire like nothing I have ever seen before and behind me was a market street bright with street lights but looked like a war zone.

When I turned my head back towards the fire and I heard the shouting that a women was about to jump I looked into my lens and…the world around me went silent. I heard nothing just the clicking off my camera, I knew what I had seen. I knew what was in side my camera, but I had no idea of the impact that it would have.

The moment I took those frames and once she had landed I could see her running away, I held my hand over my mouth in shock at what was happening.

In answer to a comment on the blog, I never hung around to get names, I was in a war zone. After the silence I experienced, it became insane noise of explosions and people screaming at each other. I covered my camera inside my cardigan and ran towards my car to be told by riot police to turn back. So I had to then run via the very road I had just seen behind me full of rioters and people turning on other people. I ran non stop till I reached another road blocked by riot police who again tried to stop me. I showed him my press pass, and he let me go past him to my car.

Getting names and ‘hanging’ around was not a safe option.

I don’t believe this [photo] fueled any rioters or looters. I think this image shows something breath taking, life and death, a moment in time. When I look at the image now I hear the silence I experienced…if that is even possible for anyone else to understand. I have not yet met Monika, the lady who jumped.

I read some very positive comments on your blog, so thank you to all those people and the positive feedback

Love and peace to this wonderful, fragile world we live in. Amy x