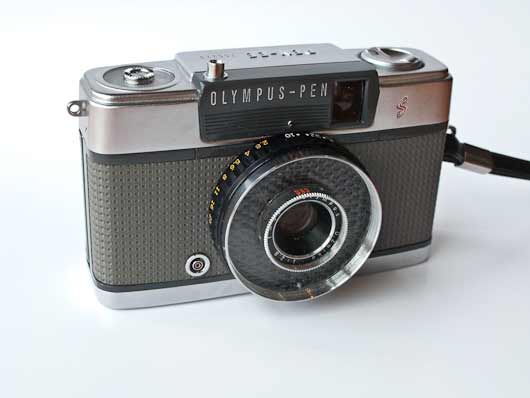 The year was 1968. My uncle was killed in Vietnam, and this was the camera that he carried into war.

But this isn’t a sad story, nor is it the end of a story, it’s a sort of a cool new beginning–not for my uncle Rick unfortunately, but it is for this little camera.

Enter stage right: Seattle’s largest cultural festival, Bumbershoot. Hundreds of bands, theater, performance, food, it’s a 3 day festival in September. Very cool. Enter stage left: my good friend, renowned food guru Michael Hebb (he’s my partner in our www.songsforeatinganddrinking.com project). Hebb was an artist in residence at this festival, and he chose to do what he does so well – host open dinners for 50 people to share, discuss, and revive ideas. The topic for this series of dinners?…the ideas behind arguably the most revolutionary year in US history (and certainly a huge year worldwide), 1968. And to this dinner, guests were required to bring something to share – a story, a poem, memory, an artifact – from or about 1968 in exchange for this meal that he would prepare. From Hebb:

greetings – you are here at one pot at bumbershoot so that i can feed you – but also so that i can get something from you – the basic request is one of reciprocation – I cook you dinner and you bring me something – it seems to be that this basic exchange is the root of most culture. money is an unfortunate substitution for basic reciprocity – it is silent, and generally rather dirty, “it don’t sing and dance and it don’t walk” – many cultures have (had) great ritual in the matters of the table and the guest/host relationship – the greeks in the classical era were famous for long treatises on the importance of proper exchange – the table was central to this – the collapses of this code often resulted in calamity. take for instance when paris decided to take more than food from the the table of menelaus (he slipped helen of troy into his pocket) the result was the most mythologized war of all time. so don’t steel my woman – I will burn down your village. restaurant tables do not offer this kind of currency. this table was built as a kind of modern agora for an exchange about a very important time – 68 changed our world – I don’t profess to be of high knowledge about this era – this year – in fact I wasn’t even born – but I launched this project to learn about how it came to pass that all the way around the globe thought and ideas turned into action – the world is filled with ideas – and yet the world has arguably never seen as much action as it did in 1968.

As you’ve already guessed, I brought the this little camera to the table along with the story of my uncle’s passing. And I brought it all three nights, along with a handful of Ilford Delta 3200 film, taking a snapshop portrait of every person in attendance, largely total strangers, over their shoulders, in near total darkness. [More story and photos after the jump. Click ‘continue reading’ below…] —

So, aside from this being my uncle’s war camera, the other interesting things about this camera are:
1. It hadn’t seen a roll of film since my uncle’s death in that year of revolution, 1968, and I was keen to change that.
2. The camera is called a “half-frame”, meaning that it takes 35mm film, but takes photos that fill only half of a 35mm frame. As such it gets 72 “portrait” images on a roll.
3. It has presets for 160 and 200 ASA film only.
4. It has a built-in ring flash (can you imagine how stoked David Hobby would be?!)
[Update – turns out it’s not a ring flash, but a selenium light meter..]

With that information, I formulated the following plan:
1. I wasn’t going to “check” my work after the first night. I planned to just snapping portraits all three nights and see what I got. I WANTED – was desperately looking for – unique, awkward snapshots of total strangers bonding beautifully, strangely over dinner. Eerie pictures, weird pictures.
2. I couldn’t locate the appropriate power source for the ring flash given the short time between when I tracked down the camera in my family and the event. As such, I was forced to go natural light – when there was none. Hence, I’d shoot 3200 iso, and I’d push it.
3. Since there’s only a single dial on the front of the camera with shutter speeds, aperture, and ISO all on the same dial, I had no idea how to get 3200 thru there “properly”. As such, I decided to shoot a test roll. Since the room was going to be “lit” the same for all three nights, I’d be ok. I just clicked off 35 pictures of the room right when I get in there on the first night. When it came time to process the film, the lab could then “snip” this roll — develop a bunch of different pieces of the film for different lengths of time — and decide what the right development time in the tank would be for the remainder of the “real” rolls.

Well, the plan was a reasonable one. And I got a pile of fascinating, simple, bizarre images from the dark dinner table. They are indeed blurry, weird, old-looking, but cool. And I think they’re cool because of what they recorded and how and why. And now they’re a part of the permanent Bumbershoot festival collection. Here’s a sample: 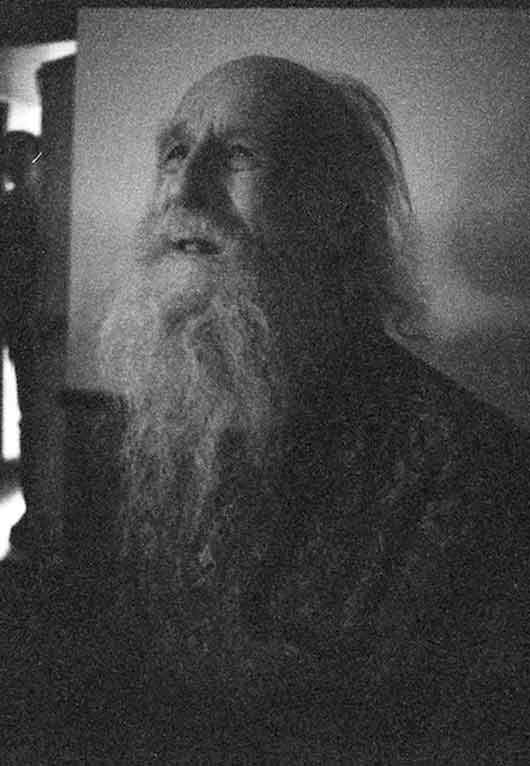 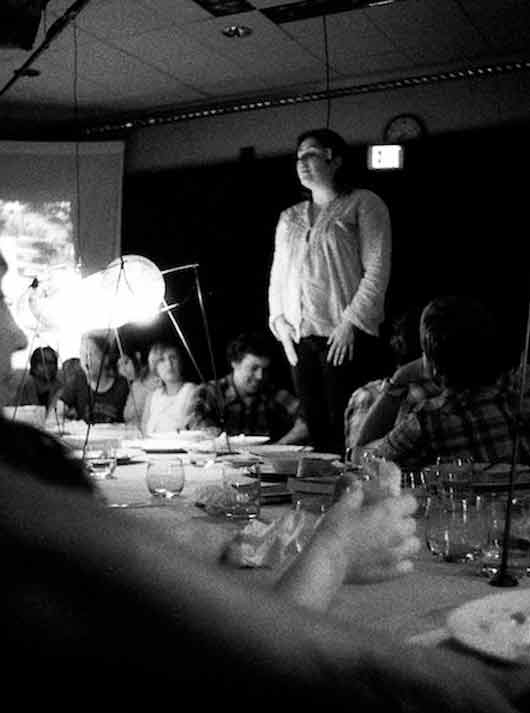 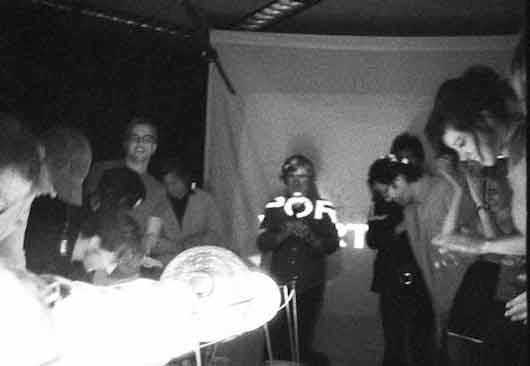 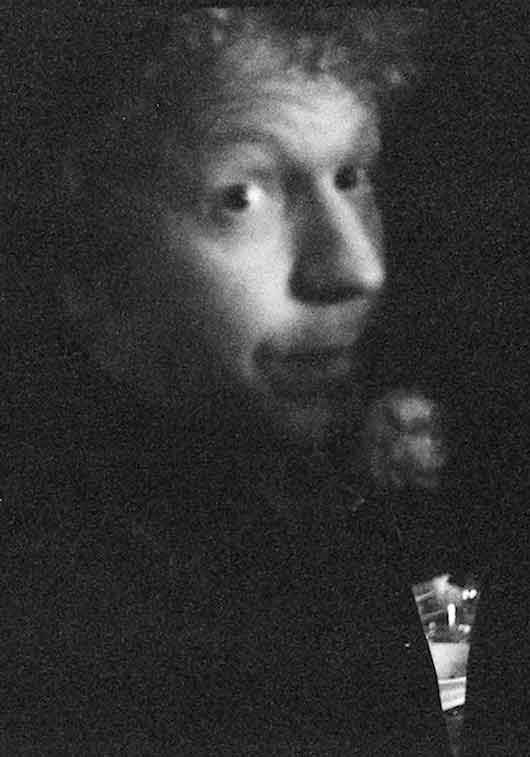 So I’m looking forward to my new beginning with this weird little camera. Sure I love my iphone, but this is something different. It can’t be used, but it has it’s special place. Here’s a couple more snaps of this neat old camera below, and then a whole lot of pictures from dinner–150 or more. Keep in mind that a lot didn’t turn out. The camera misfired, or people were unrecognizable, or I blew it. Many of these suck beautifully, and some suck poorly. I’m fine with that and hopefully you are too. There’s some well known people tucked in these pictures if you care about that stuff. There’s the good snaps, crap ones and everything indecipherable and in between–the bulk of which can be found at this link here. 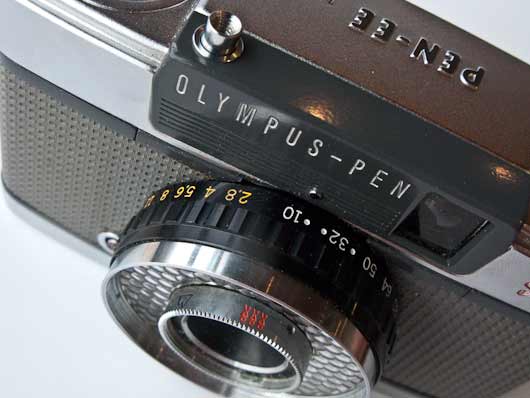 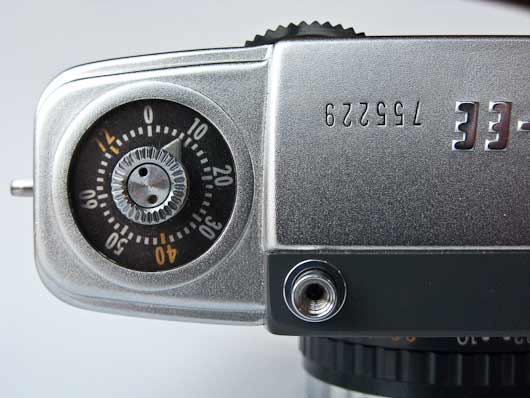 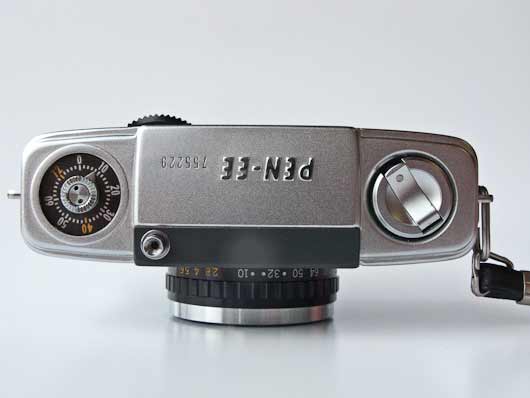 I learned a lot about 1968 that weekend from poems, songs and first hand accounts. I learned more deeply what revolution stands for, how it works, and how it fails. And I learned how to shoot this cool little camera. I love the power of the story or the image and a meaningful meal. I hope you enjoy these photos in a not-so-perfect sort of way. They are a slice of a strange and powerful dinner in 2008, of half-frames, and 3200 Ilford Delta film pushed like mad.

UPDATE: posted an online version of a giant print composite (4ft by 7ft) that we’ve made with the images to celebrate this series of evenings. View it in this online gallery here…