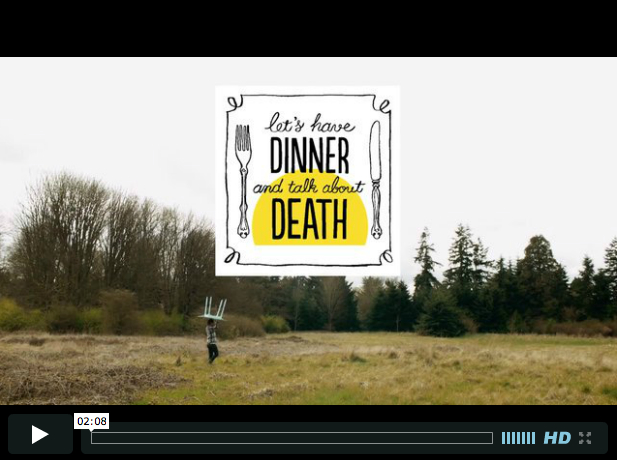 Let’s Have Dinner & Talk About Death [Kickstarter of the Week]

I didn’t talk about it much, but over the past month I lost two close family members in 48 hours. My grandmother passed away on Mother’s Day and my wife Kate’s grandmother passed away 2 days later. Neither was expected. As you might imagine, it was a crushing week (and following month) for our family. And now not a day goes by that I don’t think about them. More importantly, I’ve had a real chance to reflect on their lives — for which I wouldn’t change a thing — AND their deaths…for which I would change a lot.

In the USA in particular — but in many of the countries I’m familiar with — we don’t do well with death. We don’t talk about it enough, we don’t like to think about it and, consequently, as a culture we don’t do well with arguably the most important part of our lives…the final chapter. Did you know that 75% of people say that they would prefer to die at home, but only 25% end up doing so? Did you know that end of life expense is the number one reason for bankruptcy in the US? This is not dignity. This is terrible.

And that is the point of this kickstarter campaign by my dear friend Michael Hebb. We’ve done loads of collaborations together, like SongsForEatingAndDrinking, where we’ve hosted the likes of Macklemore and Pearl Jam guys and many others. I know the power of conversation around a meal – and have experienced the power of action rising up from the table. If anyone can start the movement to talk about death that will change our current approach, it’s Hebb. Michael, plus the University of Washington’s Masters of Communication Learning program, an interactive firm CIVILIZATION, Engage with Grace and some of the nation’s leading health and wellness organizations are working to fully launch their www.deathoverdinner.org, a project which will hope to jumpstart the national dialogue on how we End our Lives.

I encourage you all to join me in supporting it here. Much thanks and love.