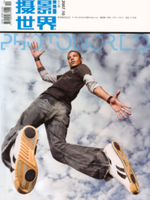 I’m huge in China because the average height of a Chinese male is 5 foot 5 inches tall, and I’m 6 foot tall, right on the dot.

Trivia aside, the Chinese periodical PhotoWorld China just rolled out a 5,000 word story featuring yours truly. I normally don’t put these things in the regular blog, and instead put this stuff in the press page at chasejarvis.com This is a little different, however, so let me explain: I figured the interview from 6 months ago would yield a standard 4 paragraph puff piece. FWIW, the first half kinda does read like the typical feature highlighting any photographer (trademark style, background, blah, blah), but the second half of this piece reveals the kind of stuff that I’m actually proud of. Stuff that–given my druthers–is how more profiles would read about other photogs, painters, artist, whomever…. Stuff about the art, influence, method, psychosis, habits, personal stuff, etc. It’s the sort of stuff that I think people care about. Sure the language is too flowery and the details engorged, but I like the heart of it – the art and mentality behind it – which is why I’m sharing it here. I have a feeling that the writer, Ethan Salwen, went to bat back in China for those bits that are rare to this sort of article. Thanks Ethan, you’re a great journalist.

[When you’re done reading the Chinese version, take heed of the wikipedia list of average heights for males and females, by country:]