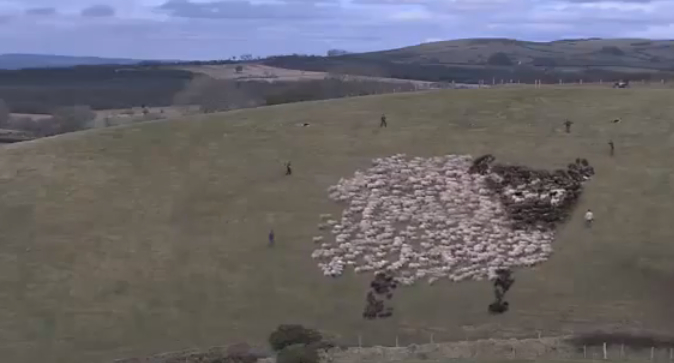 In a virtual world full of fans, circles, followers and friends, today we celebrate the world’s greatest follower: the sheep. Consider: A clever group of Welsh hill farmers dress their flock of unsuspecting sheep up in LED lights and — with the help of some seriously talented/obedient/well-trained border collies — create moving art on a hillside and film it from a distance. Check it out:

Matt Smith, the co-founder of the ad agency The Viral Factory who shot the video for Samsung, interviewed for a Telegraph article not long after the video blew up. He admits to some post-production trickery, but those are real sheep, real dogs and the real Welsh national sheep herding champion Gerry Lewis guiding actual sheep around into position. [The Mona Lisa bit was their wink-wink, nudge-nudge moment, apparently.]

For a closer look at a master sheep herder at work, check out this video of Brendan Ferris of the Kells Sheep Centre.