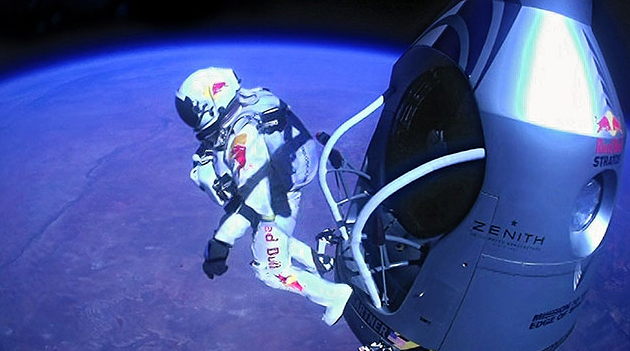 Congratulations to “Fearless Felix” and the crew at Red Bull for inspiring the world’s imagination yesterday when Felix Baumgartner stepped out of his capsule halfway to outer space and plummeted back to Earth from more than 120,000 feet (24 miles) above Roswell, New Mexico. The 43-year-old pilot became the first person to break the sound barrier outside an aircraft reaching speeds of mach 1.24 (834mph). To break the record, he stepped off a tiny ledge outside his capsule, a pod-like unit that carried him nearly 25 miles up into the stratosphere by an super-thin, 55-story-tall balloon that Red Bull and he designed for this skydive from space. Red Bull and Felix captured every moment of the “Mission to the Edge of Space” or “Supersonic Freefall,” feat on video – and broadcast the entire process to the world LIVE yesterday. The coverage and trending on social channels rivaled the Sunday afternoon NFL games. The full jump is captured in the video above. Doh! Removed. Heard from a reader and then verified that the helmet cam release was a bootleg…thx for the tip. We’ll keep our eyes posted for a legit source from Felix and RedBull…

As a result of the jump, Felix Baumgartner now holds the record for completing the highest-altitude jump and highest manned-balloon flight. He did not however break the record for the longest fee-fall as he had hoped. This is still held by retired U.S. Air Force Col. Joe Kittinger’s 1960 jump.Kittinger, who served as part of Baumgartner’s support team for this attempt, spent 5-minutes-35-seconds in free-fall during his Air Force mission jump while Baumgartner was in free-fall for 4:20 before pulling his chute during the Red Bull Stratos jump.

According to Baumgartner, the Red Bull space jump was between five and seven years in the making. The budget associated with this visionary (and now highly-successful) project are unknown, but the figures are probably also somewhere in the stratosphere.

To see a ton more on the jump go over to Red Bull’s media site here.