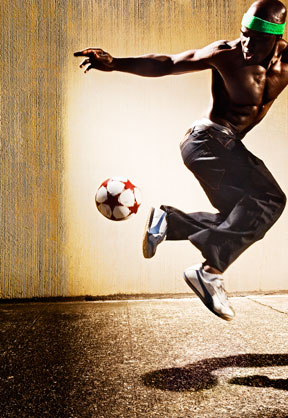 Ever wanted to shoot with a strobe at a faster shutter speed that your camera’s flash sync allows for? (Only like EVERY darn day, probably…since a 1/250 is sooo wimpy…). Well, I’ve been using this cool technique for quite some time, but it never occurred to me to share it as a neat-o “hack” to beat the system. My pal over at Strobist however, who is much sharper than I at identifying cool tips like these as actually being relevant, posted a great piece yesterday on precisely this topic. For a more complete explanation and a two-part entry on the subject check it out there…

The principle is simple: If 1/250th of a second allows your camera to sync perfectly with your flash (full flash coverage across the entire frame), other steps up the shutter speed ladder (1/320, 1/400, 1/500, 1/640, 1/800, 1/1000) don’t give you ZERO light, they in fact give you partial, but substantial, light on your subject according to a relatively predictable pattern. Basically, the shutter “drags” across the frame in a race with your strobe–typically from one edge to the other– in such a manner to get an band of flashed light across the image frame, roughly according to guide below. 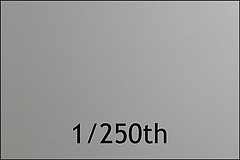 Thus, if at 1/250th you get 100% coverage–or rather a perfect sync–, at 1/500 (a full stop faster than your flash is “supposed” to sync with your shutter with typical dSLRs) you might get as much as 50% coverage – or enough to make a really cool image.

Strobist talks about employing this technique primarily to gain flash sync speed by framing and lighting your subjects in such way as to hide or make subtle the harsh-ish lighting line created by the incomplete sync (ie, using it like a strip light in dark situations or setting your camera close–one stop he suggests–to ambient light) so there’s not much visible difference in what’s lit or not… My approach is slightly different. I actually use this technique and visually ENHANCE that dark line in pursuit of a unique aesthetic. By simply increasing the difference between my camera’s exposure settings an the ambient light, I don’t hide the shutter drag with the ambient exposure, I ACCENTUATE the line to get a certain, almost an intensified “flagged” look (physically blocking certain parts of a strobe using handheld or stand-mounted boards, scrims, etc) – as in the image above at the header of this post. You’ll see the subject is well lit, but the area to the left of his arm is quite dark.

There is certainly an air of unpredictability to this, especially with a fast-moving subject, however, with a couple takes I can usually nail the framing for which I’m aiming.

Lastly, if you’re not out there hacking, tricking, messing or playing with this and other non-traditional looks or techniques, and pushing the limits of your equipment, you should consider trying it. There’s a whole world beyond F8 at 1/250th. Don’t simply let your camera manual or your photo class instructor mandate what’s cool. Let your own aesthetic and the back of the camera teach you what works and what doesn’t!