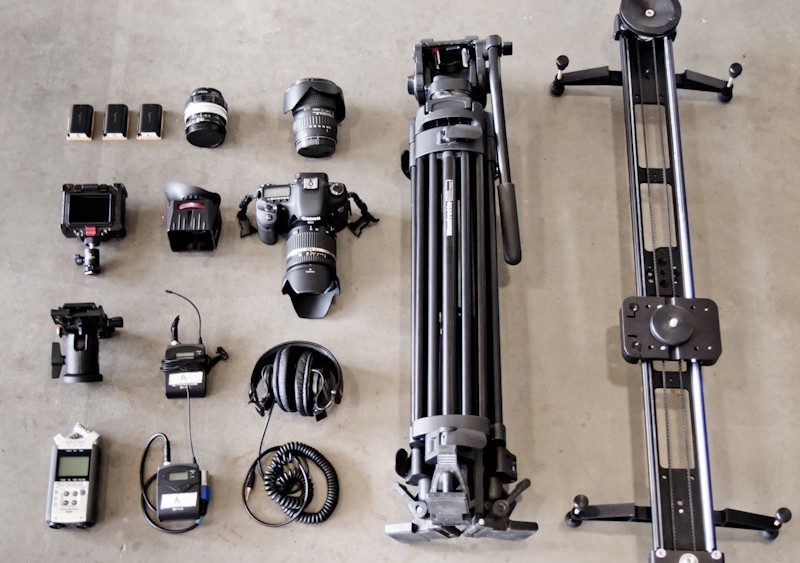 Hey friends.  Erik the video guy here. We’ve had a bunch of YOUR questions come in about what gear/process/technique we used to make the Dasein docu-short we posted a couple days ago so I thought I’d chime in with a quick gear- and technique-specific follow up on how this film was made.

First, Chase was the director on the project but wanted to remain focused simply on the overall look and feel. Plus, since he was in front of the camera most of the time, he specifically did NOT want to get sucked into all the details to get the look he wanted, so that put me squarely in the Director of Photography (DP) role, in charge of all the details he wanted to avoid. This worked out great – we collaborate really well in this capacity.

Since I knew heading to New York that we’d be working at all hours, around Chase’s crazy schedule and with no permits, no location assistance, and (in the best way) no solid plan on when and where we would be shooting, I made the call that one of our main objectives was to stay light and quick with our gear selection.

Given that an important part of this short film is about time–creating time in your life for creativity–Chase wanted the film shot in a way that arrested time visually…that is, he wanted it shot in slow motion. This was a part of the initial treatment he’d written for the piece. And while we originally discussed shooting with a RED One or Epic, I ultimately thought this might not mesh well with the “light/fast” motto I’d already decreed above. I wanted everything, minus the tripod and dolly, to fit in one bag – something I could manage by myself — in this case, one of our fav bags, the Lowepro Classified 250 shoulder bag. And it’s small…

So here’s what I lugged around:

Let’s start with the CAMERA/LENS SELECTION. Factoring that Chase wanted the high frame rate, that he’d not be shooting at all–only directing–, PLUS the limited budget he’d allocated to make this film happen (not enough to bring in a RED and a bunch of primes for a month), I made the call that I would simply use my own personal camera/lens gear. So I shot the piece with my Canon 7D. I’m good with a range of cameras, but the 7D made sense because it gave the film 60p slow motion that Chase required, plus it was small, very light, and since I own it personally, it was free. I also carried 3 of my own lenses; the Tamron 17-50mm f/2.8 VC, the Tokina 11-16mm f/2.8, and an old Nikon manual 85mm f/1.8 with a Nikon-EOS adapter.  They’re nothing fancy, but I was sure they’d do the job. The Tamron is a great all-purpose lens and the vibration compensation is fantastic for shooting handheld.  Most of the footage was captured with that lens.  I used the Tokina the least, but was great when Chase wanted a dramatically wide shot, and the Nikon 85mm was for when we needed that extra bit of focal length and space compression.

AUDIO.  We captured Chase’s interviews with a Sennheiser Evolution G3 wireless lavalier set and a Zoom H4n Handy Recorder.  Pretty straight forward, not too exciting, so let’s move on to the really fun stuff…

CAMERA SUPPORT:  For this project we acquired two of my new favorite toys; the Zacuto EVF Pro and the Kessler Pocket Dolly.  These two products are brilliant on their own, but when their powers combine they create a silky smooth shooting experience.

The Zacuto EVF is an amazingly powerful LCD monitor packed into a compact and lightweight package.  It’s powered by the same battery that the Canon 5D/7D use and offers a plethora of helpful functions such as monochrome viewing (very helpful when you’re filming a documentary that will be black and white in the end), zebra stripes and false color for checking exposure, focus peaking assist (my personal favorite), frame lines, and a lot more.  The monitor works with or without a Z-Finder snapped onto it, and on the Pro and Flip models the Z-Finder mounting frame swings up to get out of your way when you don’t need it while keeping the Z-Finder close by so you can quickly snap it back into action.

The ultra portable Kessler Pocket Dolly was great for getting some much needed movement into our shots.  We got ours with the optional outrigger feet for shooting low to the ground, and the feet are adjustable so you can maintain a level dolly move on uneven surfaces.  The dolly also has various screw threads on the base so you can quickly secure it to a tripod.  It becomes a bit of a beast when it’s setup like that, but it breaks down pretty quickly when you need to move.  I’m always amazed at what a difference a little camera movement makes in video shots, even with just a little more than three feet of track.  I highly highly recommend it.

Like I said earlier, these two products make a great combination.  All of us on the CJ crew consider a dolly or some sort of moving camera support mandatory for capturing dynamic footage, and the addition of the Zacuto monitor is a great way to keep from having to lay down on the ground to see what you’re shooting from your worm’s eye view camera angle.

We cut the piece together using Apple Final Cut Pro. And we did all the color (B+W) grading in FCP as well.

So there ya go.  That was my setup, front to back. Hope you can dig into this stuff in more detail this weekend. And hopefully this post has showed you how–with some good artistic vision–a fairly minimalist video kit can produce dynamic results like this: