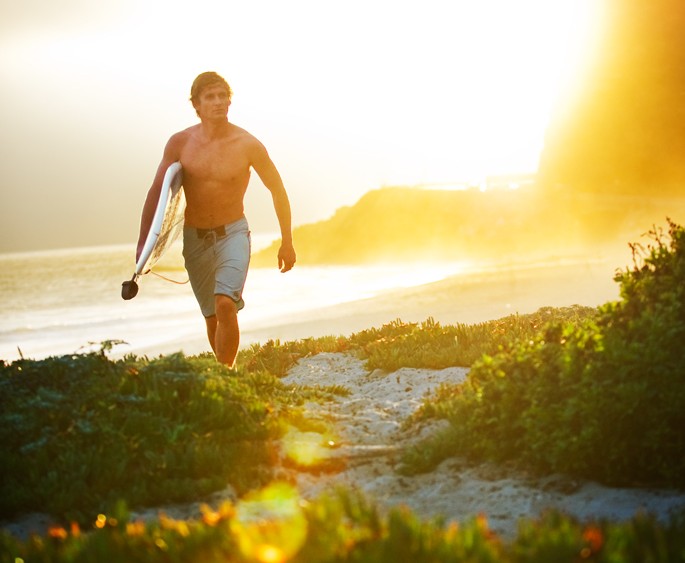 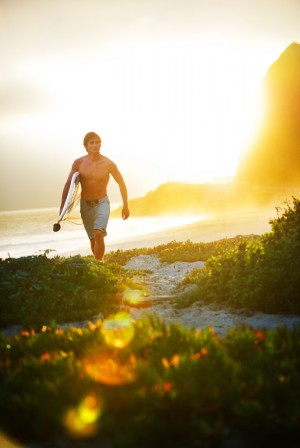 Background Story.
This image was a part of a global campaign — print, OOH and digital – for Naked Juice in 2011. This image was one image in a series of 6 ads where the goal was to achieve what we were calling “the Naked Lens” — a superwarm, hard backlit look, complete with lens flare and jeweled tones throughout the image. While it might be an overused look these days — lens flares hadn’t yet hitting the mainstream for advertising. The idea was that this look, when combined across all Naked’s imagery, could be an “own-able” look for Naked. You can see a few other images from that campaign here or here on the agency’s site to get the gist of them together.

But I can already hear you — “so what’s so special about this shot, Chase? It’s just a guy walking down the beach with a surfboard!” Fair point, but ironically I chose this image specifically for that point. One of the most popular questions I get asked about photography is… “what’s it like to do X, or shoot with Y, in crazy location Z?” By and large people want to hear the sexy war stories of the profession — and there are plenty. BUT in high-end, broad reach advertising work you’re rarely asked to shoot the sexy or the impossible. More often you’re asked to shoot the “normal” under some unique circumstances… be those circumstances a special lighting situation, a special location, during a special type of weather, etc… and with 100 smart people (agency, client, everybody else under the sun) looking over your shoulder all the while — each with their own opinion on the best way to do something. That was the case for this image, and that’s why I thought it a more worthy share than another sexy war story. IMHO it might be a less sexy story, but it’s a better read and ultimately more valuable for takeaways because it’s more real than most of the shiz you’ll read.

Setup
Sometimes even the simple images are hard to get. We were setup on location in Malibu at a beach park we’d permitted after scouting the week before. Key challenge #1 = the weather was NOT good. Overcast, cold, with fog and broken clouds. Certainly no one expects you to control the weather and contracts are written with “weather days” etc, but that’s my point. It DEFINITELY contributes to the mood on set — to everyones mood. All of which not ideal when your #1 objective is a warm, backlit sun flare. To add some complications in there, it was our last shot to get, we’d nailed the previous 5 shooting in LA over the past week. There was a fair pressure to get it done… budget pressure. Nobody likes cost overages and you can imagine the costs of 30+ people staying for another day — client, agency, wardrobe, styling, art department, motorhomes, cancellation fees, etc etc. There was at least another $50 – $100,000 on the line if we didn’t get the shot.

We were all setup several hours early, and a lot of less experienced people on set (client’s do these shoots once or twice a year, the agencies do them a few more, whereas we photographers literally live in this stuff) and the people with the purse strings are getting fidgety. [“Why are we even here? It’s cloudy weather! Shouldn’t we scramble to another location and try to poach the shot down in Venice? My phone says its sunny down there.”]

ENTER: 3 THINGS…
1. Patience. Scrambling 30 people to a new location that “might” be sunny, to shoot without a permit, is NOT a good idea. Parking alone is a nightmare, let alone all the rest. Besides risking getting shut down from the cops, nobody likes a scramble. Moreover, there is a phenomenon that you should be familiar with… it’s the phenomenon that quite frequently bites people in the ass: chasing light, i.e. “you can see it’s sunny right over there.” This sometimes plays in your favor with a smaller crew and a consistent weather pattern, but we had neither of those.

2. Sun Seeker App. Now I’m in no way affiliated with this $10 Sun Seeker app (and I’ve written about it before), but I use it every day of every outdoor photo shoot I’m on. In short, it’s a must have — it gives you the exact location of the sun in the sky at any given time. In this particular situation, when we’d scouted the location earlier we’d identified that our scene would be backlit the right amount for about 45 minutes before the sun went behind this hill just to the northwest of the beach we were on. BUT BUT BUT given the situation at hand I could tell that there were some breaks in the cloud happening right in the zone where the sun was going to be in an hour… and that — if things worked out perfectly — we might get a few minutes of sun just before it went behind the hill overlooking the beach (that you can see in the background of the image).

3. Making the Tough Call. They say that making hard calls in photography “goes with the pay grade.” But let’s be clear: most of the calls you must make on set — to shoot or not to shoot, to stay or move, to use this lens or that one, this model or that, this camera or that, do this or that or don’t — are based on gut and experience, and all of your gut and experience were cultivated with imperfect data. It’s a feeling combined with experience. Well, that’s what went down here. I had a strong hunch we’d get a minute or two of direct sun beneath the clouds and above the horizon, just right before it dipped away. I’d seen it happen 100 times, and that experience coupled withe the technology that told me where the sun was going to be AND the patience to always wait — to always give yourself a chance (see this post) to make the shot.

So, that’s what we did here. Amidst the voices from client and bystanders and agency and etc., I held the cast and crew at the location… and it worked. The sun turned on like a light switch, burning brightly and warmly for exactly 2 minutes. Not 20 minutes, not 2 hours. 2 minutes. But because we were ready (against everyone else’s desire… “its so cloudy its NEVER going to happen…”) we nailed the shot in a 2 minute window.

Why I chose these settings
I needed the aperture wide open to get the light flare as I wanted it and I needed to be 1000% sure to freeze an action (at least 1/1000) and so that roughly dictated my ISO at 800 given the conditions.

Direction
In this case, my direction to the model was much more complex than you might think. First of all, it was very cold — probably in the 50’s and windy, so keeping him warm in between practice run thru’s was a must — can’t have a surfer all goose-bumped out. Second, in order to put him in the right spot on the horizon and in our frame he had to walk in a very unnatural part of the trail, while looking up and keeping a natural expression… no smiles, just contentment. So, the directions weren’t easy, but that’s what makes a pro model a pro. Seriously. Walk “normally” on this root-covered area just off the path with a perfect facial expression, carrying this surf board exactly this way, don’t look where you’re walking, and god forbid don’t look like you’re cold even though you’re wearing no clothes and it’s 50 degrees and windy as hell… aaaaaand now do that 50 times in 2 minutes while I unload 1,000 frames or so. THAT was the direction. #RequiredToGetTheShot

Post Production
In Photoshop we didn’t do all that much. Primarily some light balance between the hot sun and the darker elements (greens, etc.) in the front. The Nikon has great dynamic range, but we focused mostly on tweaking the balance between the brightest bits of the image and the darkest. We warmed it up a tad, we amplified the lens flare and we went a hair more to the jewel side of the tones in the image color to match the creative brief and the other images in the campaign. And Voila!

So there you have it. Feel free to hit me up on Twitter and Fbook with any questions. If you dig this blog post, I only share one of these every so often here… BUT I share one of these case studies every other week to my email list, with a complete breakdown of ever bit of the image making process. If you want to join the thousands of people who receive these special emails, do so on this form here. I will never spam you or share your info. #Respect.