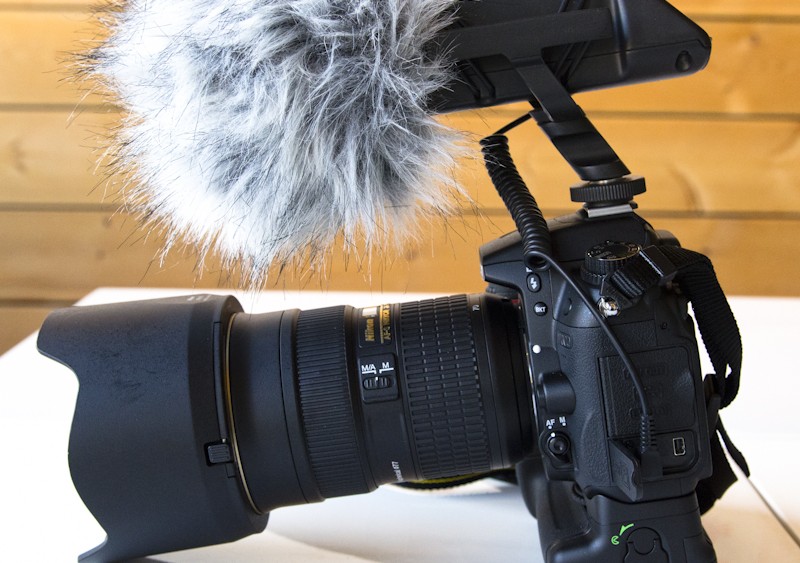 [Alrighty gear heads. Erik here with a continuation of the series of posts where I elaborate on the gear that I consider essential for my video job here at CJinc.  I previously discussed how the Zaucto Z-Finder helps me guarantee the visual quality of my video, and in this post I’ll explain how the Rode Stereo Video Mic ensures that my BTS footage will have respectable sound too.  Perhaps more importantly though, how it allows me to take my mind off of capturing audio and instead focus it on staying creative while shooting.]

If you’ve seen our D7000 video, you’ve heard this microphone.  Every bit of audio in that video, minus Chase’s opening narration and the music, was captured with the Rode.  In fact, we put it to use on nearly every behind the scenes video we make.  From the mountains in Telluride to the South China Sea, this mic has withstood it all.  Much like the Zacuto Z-Finder that I wrote about in my first post, what I love about the Rode SVM is its simplicity.  Before I get into the details, I feel like I should back up a little and explain why it’s needed in the first place……

Built-in camera microphones are crap.  They pick up every bump and tap that occurs naturally as you handle the camera.  They’re especially bad on DSLR’s where they’ll pick up the sound of the lens’s autofocus motor and image stabilizer you may be using.  If you’re using the onboard microphone on your DSLR and you’re wondering why your footage sounds like it’s inside a coffee grinder, look no further than that little Image Stabilization switch on the side of your lens.  The bottom line is that, in all of these cases, if you want usable sound, you have to use an external microphone.

Notice I said “usable sound” and not “good sound” or “perfect sound” (the latter two require a dedicated audio tech and separate gear…).  That’s because most DSLR’s aren’t really built to capture great audio. But, in many cases, especially for BTS footage, this audio is completely acceptable. Most DSLRs rely on AGC (automatic gain control), which means the camera just goes ahead and sets whatever audio level it feels is appropriate. Some cameras will let you set an audio level manually, but since DSLRs don’t have the kind of real estate to leave room for audio level knobs on the outside of the camera, that manual control is buried under at least a couple of menu screens and thus, in my opinion, is useless.  If I can’t adjust that manual setting while I’m shooting, I don’t need it.

The Rhode mic with it's "dead kitten" windscreen.

All this AGC and lack of immediate audio control isn’t such a bad thing though.  Remember at the start of this post when I said the Rode SVM let’s me take my mind off of audio and focus it on shooting creatively?  I like that I can’t control the audio when I’m shooting with a DSLR.  It’s liberating, and I’ve shot enough with these cameras and this microphone to have a *pretty good* idea as to what it’s gonna sound like when I drop it into Final Cut Pro.  The mic is simple and reliable.

Speaking of simple, here’s the rundown of the controls of this beauty.  It has a nice big LED on the back of it, right in front of my face, that let’s me know that it’s on.  It has a power switch, a -10dB pad switch, and a high pass filter switch, and that’s all I need.  And actually, to be honest, I don’t usually take notice of the position of any of the switches other than the power switch.  I should mention at this point that, for the most part, we use this microphone to shoot behind the scenes videos which are typically a little rough around the edges (which is our style), and thus the audio isn’t particularly critical.  When audio is critical, such as an important interview, a short film or commercial with dialogue, or a voice over type narration, we do one of two things; hire a professional sound person or record it ourselves with high end mics and audio booms, even a Zoom H4n.  The Zoom H4n is an amazing gadget, but I’ll talk about that in a future post…

The Rhode SVM is available for $249 from B&H Photo.