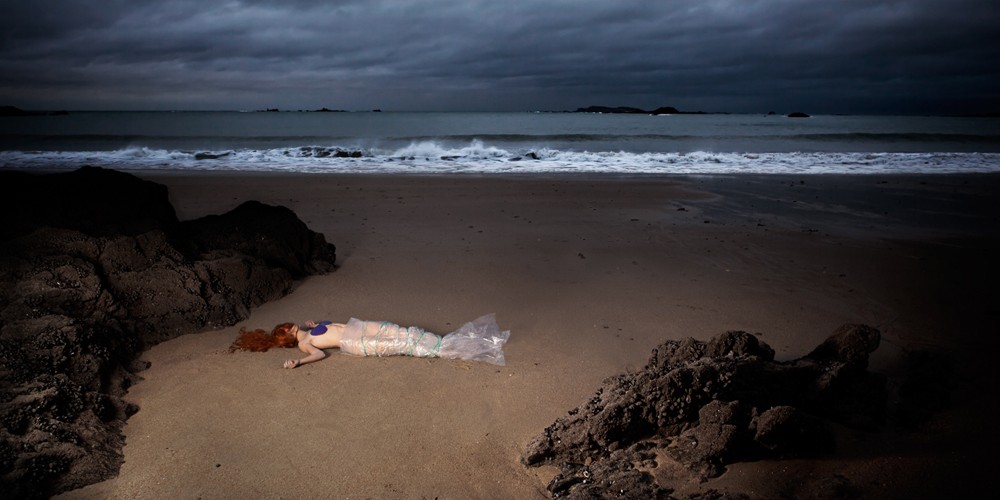 Disney movies are an integrated part of childhood for most Westernized culture, to the point where if someone is presented with a picture of any of the “princesses” they can immediately identify them. These princesses are a clearly engrained part of our youth culture, visions of feminine charm and reworked classic fairy tales. But what happens when instead of showing these fictional women as beautiful shining figures, you surround them with filth and death? Click through the tabs images above to see examples of just that – the work of Thomas Czarnecki.

The French photographer’s stunning series “From Enchantment to Down” caught my eye and I asked him to elaborate about this innovative and shocking photoset – this is what he had to say:

“I like the darkness aesthetics, I was always been attracted by the world of movies like David Fincher’s Seven or Tim Burton and David Lynch. In photography I’ve found inspiration in many: Eugenio Recuenco, David Lachapelle, Guy Bourdin or my friends Olvier Foulon and Olivier Lecerf – [these] are only a few.  Obviously, many an inspiration comes from the digital world, the web, and I can surf for hours going through many a visual adventure that I take inside of me. Each photo takes a long time to achieve, it is sometimes a bit frustrating but that’s how it goes. Finding time between a job and social life is very complicated. I wish I could devote myself entirely to photography but it is unfortunately not possible at this time, but I don’t despair!

The theme of this series is universal. The Little Mermaid, Cinderella, Sleeping Beauty, Alice in Wonderland… So many Disney characters embedded in the collective culture as sweet and innocent creatures that I decided to get out of their recognized fairy-tale frame and universe.  I staged these same childhood heroes face against the ground and by doing so, create something of clash and culture shock between on one side the naive universe and the innocence of the fairy tales as such and confront them to the other side: a much darker reality that is as much part of our common culture and which is provided to us, incessantly through the darker side and imagery broadcasted through tv, cinema and others. I think it is this comparison that resonates universally in people and generates interest. I leave nothing to chance, each image is fully thought before every shot. I make several preparatory drawings that take into account the location, the light and the position of the character to reach the final image. Sometimes you have to make some small adjustments on the shoot, as removing accessories provided which ultimately do not bring much to the story or find a somewhat more natural for the model but in the end most of the images can be practically superimposed on the original drawing.”