Deconstruct This Photo 5.0 – How To Photograph A Prince in 5 Minutes or Less

Thanks to the couple hundred of you who took a stab at breaking down the image I nabbed of Prince Manvendra [note that this thumbnail here is a crop, not the final…go to the original post to see that one]. A couple of you nailed it to varying degrees. Here’s my breakdown of the image:

First, one thing I think you’d find interesting with this image is that I had less than 5 minutes including setup, lighting test, everything, to capture this image. The prince was in a hurry, so I probably only pulled the trigger 20 times.

Second, this shoot came out of nowhere. My friends at the Ace Hotel NYC connected me with the Prince via a text message during my last stay there, said he was in the building and thought we should know one another. They suggested I photograph the Prince – and the Prince was into it. Of course, perfect, I thought – love to photograph him. Then, the other shoe dropped. I remembered that most of my gear was in transit to the hotel from Seattle. I had my basic D3s kit and a handful of lenses, a Broncolor Scoro pack with 2 heads, a ringflash, but no appropriate light modifiers. Just a para dish that I normally use for throwing a lot of light a really far distance. NOT something I’d want to use in a portrait. No softboxes, no diffusers, no flags. Hosed, but going for it anyway.

Bare bulbs + no time = scramble mode. Within minutes I had selected a location in the hotel, a wall of speakers in the Liberty Hall room in the basement of the Ace. This was great for two reasons: 1) I thought would a great juxtaposition of the calm, and quietness of His Royal Highness with the pop culture – a way he’s certainly never been photographed before; and 2) a perfect metaphor for the Prince’s controversial, outspoken and progressive views as the world’s only openly gay Royalty and advocacy for gay rights and HIV/AIDS prevention. If I could capture all that in a still, I’d done my job.

Here we go. I was welcomed into the Prince’s room, where we became acquainted for 1 minute or so. I shot a couple images using natural window light as a backup in case we had problems with manufactured light (professional insurance ;), then led him to the location in the basement. He loved the wall of speakers. Within 60 seconds we were up and shooting. So here’s the breakdown.

Why?
Remember? This is all the gear I had with me. Limits force…ahem…creativity. Generally, The D3/s/x is my workhorse and perfectly suited for this. And the 24 -70, while not a classic portrait lens, gave me what I needed and allowed me to shoot a little wider to nab some of the cool environment, a must for this shot.

Why?
As soon as I decided to shoot wide, rather than a traditional portrait lens, I knew I needed to keep the background in reasonable focus. So I knew I needed about F8 or greater to get the depth from the Prince to the speaker wall. ISO 800 looks great on the D3 and there is no compromise on file cleanliness at the number, so that was my preferred upper limit. Throw in the strobes, and it quickly kicked me a 100th of a sec shutter which would be fine. I knew with the lighting I had, these settings would give drastic falloff into the dark room. Exactly what I’d wanted. My original guess at the aperture I’d want was F11, but I ended up at F8 when I threw the strobes in the mix. Remember, I had about 30 seconds to figure all this out, so I wasn’t splitting hairs.

Why?
With only a ringflash and a para dish, I had no soft light options. But I actually liked the look I was getting — it all went pretty well with my theme. Since the room was basically pitch black, and I had just a minute or two, I knew one important thing: Keep it simple. With that in mind, I knew two other things too…one light was going on the Prince, the other was going to light the speakers. Those were my two features. I chose the softer of the two options — the ringflash — would be best for the Prince, but I didn’t want that ringflash look, so I backed pretty far off my subject. 3/4 camera left gave me a catch light in the eyes, reasonable light on the subject, and a little of the light bleeding onto the speakers at frame left. I then took the para dish and fired it from frame right at the speakers. This helped separate the subject off the background a bit (would have loved a softbox to have given me light on the speakers and a rim light on The Prince’s right side, but that ship had sailed). A couple chimping shots, tweaking lights up and down for balance, and had to make that move I discussed above from F11 to F8, but then I was off to the races. I’m at about 4 minutes here. Which left one minute for the actual image. Twenty frames later. Done.

Post Production Treatment:
Initial work was done in Aperture, then kicked to Photoshop.

Why?
Mostly curves and some white balance in Aperture – got the image a notch above neutral. Could have gone further in Aperture, but knew we had to go to Photoshop (you’ll know why in a second), so did more work over there. Then into Photoshop for color, some contrast and punch and a good bit of custom vignetting on the floor and corners to hone the light a little – making up for what I could not achieve in camera given my constraints.

That’s all, folks. 5 minutes from hitting the room to a captured frame, including plugging in the lights and moving furniture. Would have loved to have gone wild with 30 minutes for this shot and all the right tools, and made a more perfect image, but we do what we can with what we’ve got. I like what the image says and how it says it. Ultimately, that’s our job.

Shoutouts go to Natta, Robert, JuanCarlos-H, ChrisCWPhoto, Sameer, Jamie Gordon, Seagram, Steven and Wesley, but I think JuanCarlos-H and Natta probably did the best overall descriptions. Send an email to norton@chasejarvis and we’ll send you a signed book or something fun.

Here’s the image one more time… 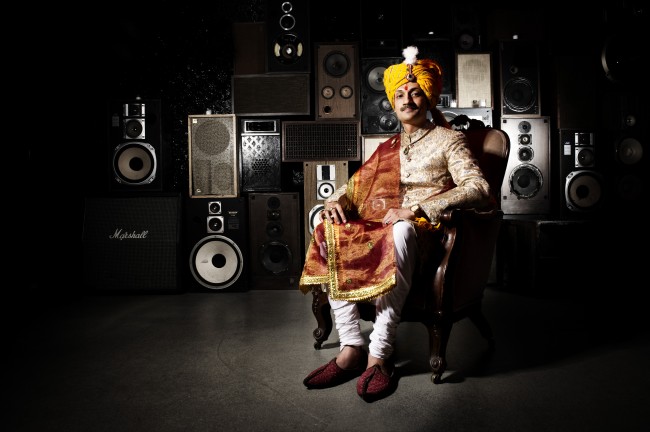