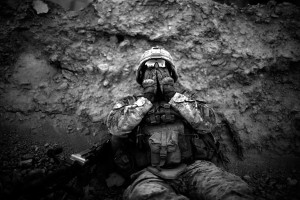 Lance Corporal Anthony Espinoza Bravo Co. 1/5 Marines, wipes the salt and sweat out of his eyes which drips down out of his helmet at the end of a day long patrol out of Patrol Base Fires in Sangin District, Helmand province, southern Afghanistan on May 4, 2011. Fighting between the Marines and insurgents was at an all time low in the past year as farmers were in the fields harvesting the poppy crop. The Marines are waiting to see if the fighting will continue as soon as the farmers are out of their fields.