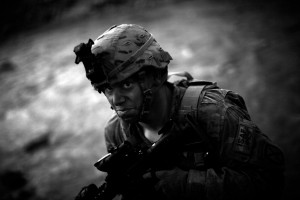 Pvt David Murphy after an exhausting run through the winding canals and ally ways of Charkh Bazaar on April 22, 2011. In the past six months Bravo company, 2-30, 4th brigade, 10th Mountain Division (the so-called “Bastard Brigade” out of Fort Polk, Louisiana) fought its way into Charkh’s central bazaar. With about 140 soldiers, they’ve logged 50 purple hearts, and the deployment is only half-over.