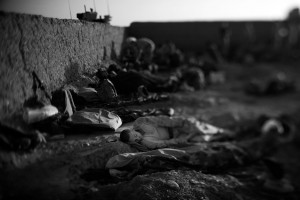 A U.S. Marine with Weapons Co., 2/8 out of Camp Lejeune North Carolina, catches the last moments of sleep before the sun rises over a temporary base nicknamed “Patrol Base Suc” in Northern Marja, Helmand Provence, southern Afghanistan on June 13, 2011. U.S. Marines are patrolling with Afghan security forces through northern Marja. Last year, Marja was the site of a major US military offensive to take back the area from Taliban fighters. But there are still pockets of Taliban throughout the area.

How To Blow Your Career In Photography