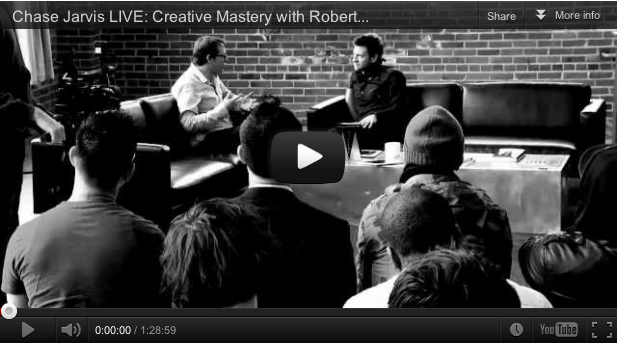 In case you missed the live episode last week – this chasejarvisLIVE with Robert Greene was one of the most powerful episodes to date. The feedback on the internet has been a testament to the impact of the show and Robert’s ability to help people. #cjLIVE trended on twitter! Thanks to all who continue to tune in to my experiment in live broadcasting. You can check out more episodes of chasejarvisLIVE over on my live page here. Huge thanks to HP, Manfrotto, Broncolor and liveBooks for helping me make the world a more creative place. Couldn’t do it with out these great friends.

My time with Robert was priceless. The principles we discuss in this episode of chasejarvisLIVE are gold for any creative working on improving their craft – OR just trying to discover their path as a creative – period. I learned a ton and I’m betting you will too.

Tune in to hear —

_Robert’s advice if you’re feeling “lost” as a creative. How to discover your passion and pursue it
_What Albert Einstein, Leonardo Da Vinci, Goethe, Napoleon and other “Masters” have in common with each other and with you
_How each of us have a unique composition that is our greatest asset
_Why choosing a career path that leverages your individuality and sparks curiosity is essential
_How an apprenticeship is a necessary step toward achieving mastery and fulfillment

You’ve heard that little voice in the back of your head that screams, “I have something to say” Guess what. It’s the same voice that Einstein, DaVinci, Napoleon and Goethe heard. It’s important. It’s what makes you a creative. Robert Greene, has influenced millions of people with his work. With four bestsellers already to his name, including The 48 Laws of Power, The Art of Seduction – he is an inspiration and an intellectual powerhouse brought his new book “Mastery” to life on the #cjLIVE stage last week.

Here’s an excerpt from his new book:

Many of the greatest Masters in history have confessed to experiencing some kind of force or voice or sense of destiny that has guided them forward. For Napoleon Bonaparte it was his “star” that he always felt in ascendance when he made the right move. For Socrates, it was his daemon, a voice that he heard, perhaps from the gods, which inevitably spoke to him in the negative–telling him what to avoid. For Goethe, he also called it a daemon–a kind of spirit that dwelled within him and compelled him to fulfill his destiny. In more modern times, Albert Einstein talked of a kind of inner voice that shaped the direction of his speculations. All of these are variations on what Leonardo da Vinci experienced with his own sense of fate.