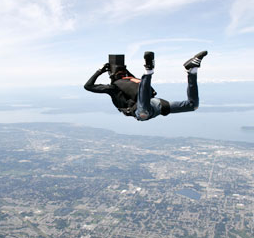 “The creation of something new is not accomplished by the intellect but by the play instinct acting from inner necessity. The creative mind plays with the objects it loves.” -Carl Jung

I read this quote right about the same time I stumbled on Aaron Gustafson‘s work. Aaron, a recent MFA graduate from Parson’s, it seems has a love for skydiving. Aaron is creatively compelled to shoot with a 4×5. Aaron is letting his mind play with the objects he loves: photography, skydiving, and creative innovation.

When I think about my own personal experiences, the times I’ve fused my creativity with that which I loved and cared deeply about, I was always made better, more interesting pictures, videos, art. Yet, I’m boggled everyday when I learn about photographers who continually lose sight of that–or worse–never know it. I’d by lying if I said it didn’t take me years to figure this out, and lying again if I said I’d never gotten off track, but let’s take 5 minutes right here and make a concerted effort to refocus on this as a community.

Take pictures of what engages you and moves you. The world–and Carl Jung–will know it by the outstanding quality of the work you will produce.

Props to Aaron for doing just that. Some of Aaron’s photos, a clean shot of his 4×5 helmet-cam, and a full press release on his efforts if you click the ‘continue reading’ link below…

Press release from his recent body of work below:

Seattle, Washington, 8 February 2010 – Seattle-based artist Aaron Gustafson recently completed a series of large-format landscape photographs that he shot while freefalling through the skies of New York and Washington State. He became the first person to take large-format photographs while skydiving.

“I wanted to upend the norms by making a [large-format] camera to be used in a wildly different way,” Gustafson said. “This is what you’d get if you threw Ansel Adams out of a plane.”

Gustafson designed a helmet-mounted 4×5-inch film camera, and during the period of several months he made one photograph per jump while skydiving at speeds greater than 130 miles per hour.

“There is a long history between photography and adventure,” artist-photographer Arthur Ou said of the project. “Gustafson’s work … continues on this lineage, though not without a sense of wit and sincere irony.”

Gustafson specially designed the camera that he used for the series. He made a prototype and then worked with a machinist and a plastics specialist to realize the final design. The camera is a cube-shaped acrylic and aluminum box that contains a wide-angle lens and houses a single sheet of 4×5-inch film at a time.

After learning to solo skydive, Gustafson made approximately 25 photo-dedicated jumps in New York and Washington State. The photographs show expansive aerial views of the Shawangunk Ridge in New York, and the Cascade Range and Puget Sound in Washington State. Subtle blur in the images alludes to how they were made.

“Photography is in a strange place now where everyone is taking camera-phone snapshots and posting them online,” Gustafson said. “But photography can still be grand and larger-than-life. This project came out of a desire for that. It’s a hybrid of new and old, calm and chaos.”

Aaron Gustafson is a 2009 MFA graduate of Parsons The New School for Design, New York. The freefall 4×5 project was a part of his final thesis, which was shown at Arnold & Sheila Aronson Galleries, New York, in 2009. Gustafson was born in Washington State and is currently based in Seattle. Much of his work deals with man in relation to nature and challenging conventions of photography.