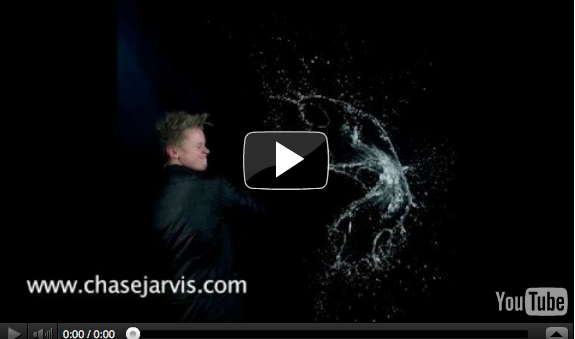 Step 1 (The Premise): If you like photography, cameras, flashes, strobe lighting, computers, knives, Photoshop, or fast action, read on.

Step 2 (The Concept): I know you’ve seen still photographs of arrows piercing apples, exploding water balloons, and bullets tearing through roses. If you’ve ever wanted to know how we photographers freeze this crazy-fast action, you’ll want to watch this 3-minute video on high speed photography.

Step 3 (The Background): A short while ago, our superstar friends at Superfad concepted, developed, and shot an amazing broadcast campaign for the Kung Fu HD network. Very cool stuff. In concert, they graciously invited us on board to shoot still images that attempted to mimic their live action work. Although the task was a steep one, we managed quite well and tricked some people into giving us a 2008 International Photography Award for the effects. You may have see the results in an earlier video we put out called Chase Jarvis RAW: Kung Fu (Featuring Superfad). Today’s video is in many ways a followup to that piece. We got so many technical questions about how we were able to freeze the action of so many fast-moving objects for our still pictures, that we thought it would be prudent to spin out a little Chase Jarvis TECH vid to show you how we pulled it together.

This is certainly beyond Strobist’s Lighting 101, but I’m hoping we’re able to answer most of your initial high speed photography questions with this video. Feel free to post your “aha!” moments or further questions in the comments section below. This is a cool technique that, if you can nail it, will give you lots of freedom to play around creatively.

For further details about equipment, a broader explanation than the video offers, a list of other TECH videos, and a list of credits, click the ‘continue reading’ link below …
—

Considering the video above, here’s a few key reminders and some details. Remember, the four keys:

1. Keep the ambient light low. This allows you to open the shutter for the duration of the event, plus some buffer before and after the event, without allowing ambient light to bleed onto your sensor or film.

2. It’s not the shutter that’s freezing the action, it’s the strobe. When your shutter is open, it’s all about letting the strobe stop the action with that pop of light. Strobes can fire really quickly – in many cases up to a 1/8000 or faster – which does a great job of stopping high speed events…much better than your shutter.

3. Use a special trigger or a manually tripped pocket wizard to capture the event. In the case of me with the water balloon, I was quick enough to open the shutter with a plunger, wait for Cody to slash the balloon, and then trip the handheld pocket wizard during the event, and then close the shutter with the plunger. If you want to capture faster action, you’ll need to use a special trigger to trip the strobes…something like a sound trigger or a laser trigger that is hopefully available at your local rental shop. You open the shutter with a plunger, let the event happen and let the trigger pop the strobes, then you close the shutter.

4. Higher speed flashes (shorter flash duration) will give you a better result. If you have a slower flash cranked up to high power, the flash duration time will be slower. On the contrary, if you have a faster flash cranked to a lower output (say 1/16 power), you’ll have a faster pop- exactly what you need to have those strobes pop for a really short interval. THAT gives you the best result. Of course you still have to manage a great exposure, which is why digital cameras are awesome. You can just fire the camera a bunch of times and dial in your exposure. In the case of my task in this video we used our favorites: two Profoto 7A packs, each with their own head and set on a low output, to create a very fast flash…in this case 1/8000 of a second. You can create similar results with all kinds of lights, but you’ll want to pay attention to the specs.

If we haven’t lost you, right on. Go give it a try yourself. And if you have questions, do ask. Signs say there are enough smart photographers in our community here that we’ll have some great answers chiming in from the audience (encouraged); and what doesn’t get answered by the community, I’ll certainly follow up as best I can.
—
For additional TECH-Y sort of vids, check out:
[Chase Jarvis TECH: Photo Shoot in 180 Seconds] [Chase Jarvis TECH: Packing Photography Gear] [Chase Jarvis TECH: POV Photography]