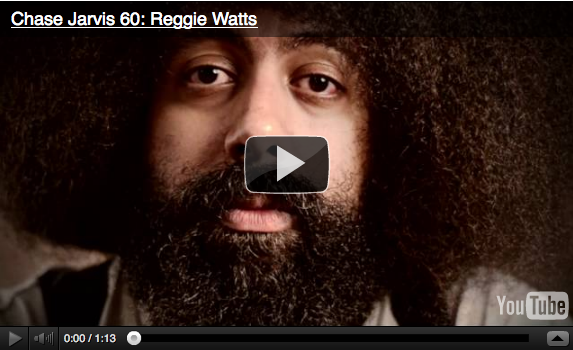 Living at the Ace Hotel New York for 5 weeks has the benefit of getting to connect with the amazing cross section of people & culture.

Enter: Reggie Watts. I’ve got a ton of respect for Reggie. He’s a genius musician in a comedian’s skin, who moved from Seattle to NYC a short while ago as his career exploded. The LA Times called him, “Deliciously strange.” New York Magazine called him, “Spectacularly original.” And in GQ’s Man of the Year Issue, they called him a “Comic Genius.” He’s been on Conan’s show, even opened for him on all Conan’s last tour dates.

Reggie and I have a lot of mutual friends, but hadn’t connected until Sunday after a surprise performance at Ace. I grabbed his 60 second video portrait. Although the concept is simple, I’ve found the results to be pretty interesting. At a fundamental level, the human face says a lot, even without the person saying anything at all. Hope you enjoy. There are two more photos I shot of Reggie, plus a behind-the-scenes snap after the jump……

Here’s a Polaroid out of my favorite 600SE. I just can’t stop loving the types of images that camera is capable of making. The…ahem…scanner I’m using here is a iphone shot of the print.

From the Polaroid 600SE

And I couldn’t help but break out the ring flash.

Here’s how unfancy the setup was in my hotel room.

Lastly, here’s some of Reggie’s work on Conan. Likes to goof, but you can tell at his core he is very serious artist and a musical maestro.

Here’s Reggie’s site. And here’s Reggie on Twitter. And if you’re an adult who likes parodies and curse words like I do, than you’ll love Reggie’s latest video: F*ck Sh*t Stack.