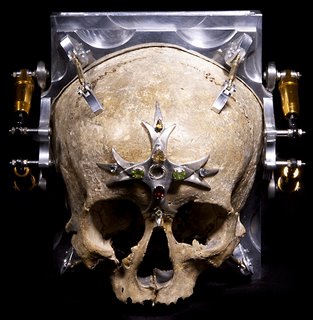 Cameras Made From Real Human Skulls

If you follow me on Twitter, you likly already saw this from my morning tweet, but I couldn’t resist posting it here as well. It’s just too unbelievable not to share. This photo (left) is of a functioning 4×5 camera made from aluminum, titanium, brass, silver, gem stones and a genuine 150-year-old human skull.

It seems that the maker of these camera, photographer Wayne Martin Belger is a complete purist and only willing to make his cameras specifically for each photo project in which he engages:

“I don’t see how I would be able to connect with my subject and produce what I want using something made in Germany or Japan. I don’t even own a camera that wasn’t made by me.”

I initially wanted to write Belger off, but after looking at a few interesting pictures and reading more about him, I couldn’t. While it’s not at all my style–or anyone’s style that I know–from a philosophical perspective he makes an interesting point about this and his other pinhole/skull cameras:

“With pinhole, the same air that touches my models can pass through the pinhole and touch the photo emulsion on the film. There’s no barrier between the two…what you get is an unmanipulated, true representation of a segment of light and time.”

I don’t need unaltered pictures or the same air that touches my subject to hit my digital sensor, but I have an odd respect for someone who does. A poke around his website for those with an open mind (and a strong stomach) is certainly interesting. Ultimately the cameras he builds and the intention behind his art are more impressive to me than the actual pictures, but arguably the story and the process add considerably to the depth of the art. And Jorg Colberg knows as well as anyone that this begs a much deeper question about art.