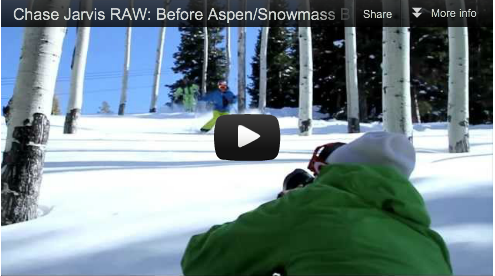 Real heli’s and remote octo-copters. Flying cameras and world-class athletes. Lots of hard work and a great campaign for one legendary resort.

Earlier this year in March you may have tuned into my live-updates while shooting the 2012-2013 campaign for Aspen/Snowmass resort. Amidst our 20 hour days we were able to kick out behind the scenes photos, some daily blog posts and a few other things highlighting our work (thanks to Aspen for being incredibly cool, most clients don’t let you do this…) But I also promised a behind-the-scenes vid… So here ’tis. 6 months after the actual shoot, but before anybody else gets to see it – we’re dropping it here today…timed with the launch of the campaign – and sharing several of the final ads before they land in magazines / billboards worldwide.

The focus for this work was to re-create and share the real Aspen experience, so we lived it. Shooting on location in the mountains comes with the usual crazy challenges. Cold weather, crazy wind, even colder hands and feet, scorching sun, altitude issues, running around above 12,000 feet… and in my case, a badly sunburned nose. While some of my BTS videos show that part of it, we wanted the focus of this video to be more on the ways we captured the photos, the people, the athletes, and the action. We skied, hiked, choppered, ate, drank and danced our way through this job – a helluva a lot work, but even more fun. Hope you enjoy.

Some nuts and bolts from the shoot not obvious from the BTS vid, but that you might be interested to know:
// I shot Nikon D3s + Canon 5d (remote from Octocopter) for stills and Nikon D7000 + Canon 7D for the Behind-the-scenes
// We strapped GoPros to my head, my leg, to an octo-copter, to myriad body parts on pro-rippers
// We used 2 real helicopters and 1 remote octo-copter
// Among the many shredders we worked with is legendary Chris Davenport. Literally one of the best pro skiers of all time. Chris has climbed and skied all 50+ 14,000 peaks in Colorado in one year and recently skied off Everest. Follow him here @steepskiing. Total badass. Consummate pro.
// We shot the entire campaign and video in 6 days
// We had a 6-person photo crew (2 producers, myself + 3 film/photo crew) + 25 others (agency, client, talent)
// We hiked + heli’ed to the top of Highland Bowl in pre-dawn hours and watched the sunrise above 12,000 feet.
// No animals were harmed in the production of this video – just a lot of brain cells

And I can’t tell you enough how much I LOVE the music track behind this video. HUGE thanks to one of my favorite bands, The Glitch Mob for working with us to incorporate this song. In between playing amazing live music, getting brought onboard soundtracks for movies like TRON and Spiderman, they managed to squeeze us in. The video wouldn’t be the same without this music. Follow them here @TheGlitchMob and buy their albums here on iTunes.