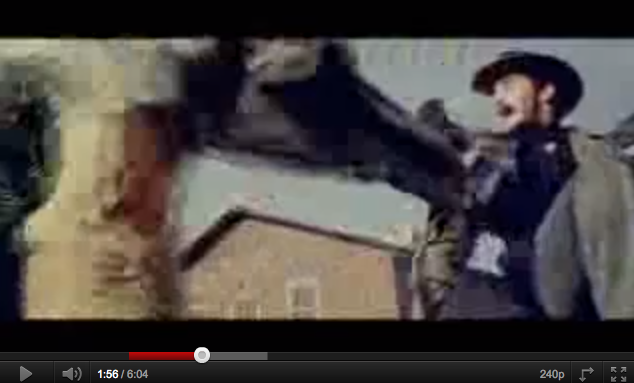 Aesthetics and The Knights of Cydonia (And A Reminder)

Holy crap. I was reminded today in a strange way that good art is about vision and intention. It’s less about the components and, ultimately, more about the process of DOING–the putting together of concepts.

My good buddy Ben Winters from Uppercut Images turned me onto this brilliant video for the track ‘Knights of Cydonia’ by the band Muse. What I loved about it is that until I’d reflected on it properly, I didn’t know what I loved about it. True I went to a lot of expensive graduate school at an MA/Ph.D program in the Philosophy of Art to help develop my ability to communicate about aesthetic taste – to put words to concepts and vice versa. But for the life of me I couldn’t figure out why I was onto this vid. I made a mental list of ‘things’ I likd about it, but it somehow didn’t measure up, especially considering that what I liked about it mostly was that it featured a bunch of elements that I either didn’t like or rather that BECAUSE it featured so many unlikable elements it was amusing. What it has:

-it has bad acting on purpose
-it pays tribute to spaghetti western (which I hate – but I love that it pays tribute to that)
-it opens with a cowboy doing bad hilarious karate (snake style, tiger style)
-it employs laser guns (which are dorky – I’m not a Star Wars guy…)
-it mixes big cinematic, operatic music with stringy electric guitar, and epic chanting
-it pays tribute to early 80’s rock operas that go way over the top
-it features more karate dancing (what?), motorcross, eagles, poop-slinging, Matrix-like action moves, and compact discs.

Each of these things–most of which I’m either neutral or don’t care for on individual merits–have somehow majestically combined to form a video that is amazing. The lesson to be reminded of here about art is I suppose that a bunch of not good things combined in an interesting and unique way can and DO give rise to new and exciting things. Vision. Intention (someone set out to MAKE art when they made this video!). And the DOING of the art carries a lot of weight. It’s a postmodern reminder that the whole IS often greater than the sum of its parts.

In tribute, I used the parts of my chili tonight at dinner–the beans and a couple peppers and some beef chunks–to make a stupid face in the bottom of my bowl. And I watched Knights of Cydonia about 6 times. Props to Joseph Kahn for directing the video.