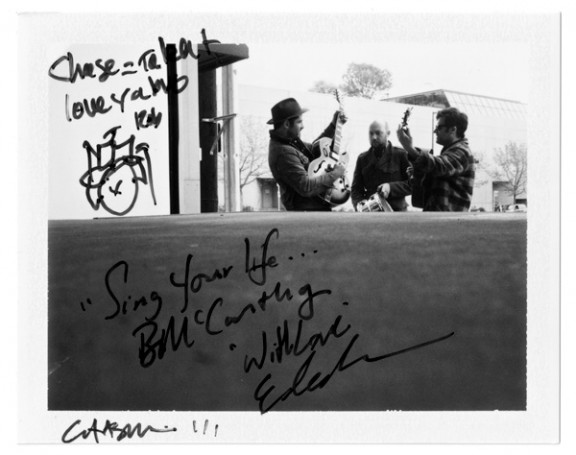 A Polaroid and a Love Note

Friends. Just wanted to say a huge thanks for tuning into chasejarvisLIVE on Wednesday for our broadcast with We Are Augustines. Those guys showed us the love by opening up their backstory, their creative process, and a truly inspired performance. And you showed the love right back in spades. When I told the band that 30,000 of you tuned into the show on Wednesday–that they were performing to a virtual stadium full of people–they were speechless, blow away, grateful beyond words. The Seattle concert that evening (amazing!) ended up selling out, their social media blew up, the free song download link has been glowing red hot since the show aired. I learned a bunch from those guys, I had a blast, and, the icing on the cake: during the live photoshoot I got some really solid images. Will post those later somewhere.

Most importantly IMHO, is that the momentum you–this community–can create, the “virtuous cycle” kind of support you’ve showed chasejarvisLIVE, the format, and the guests, whether they’re emerging artists or established, will continue to make this show better. We’re doing real work to make this better and when you share it, you write about it, you participate in it, it evolves. And it just makes me want to do more. Huge thank you. Everyone = #winning.

A full audio-only podcast version of the show, downloadable here via free subscription in iTunes (or here via rss feed). A shorted edit of the show will get posted on my YouTube channel next week. Gotta tune in live to get the whole thing/real deal.

[To the few of you who nabbed the signed Polaroid images during the broadcast–like the one above–those should go out on Monday. Hit me on DM.]