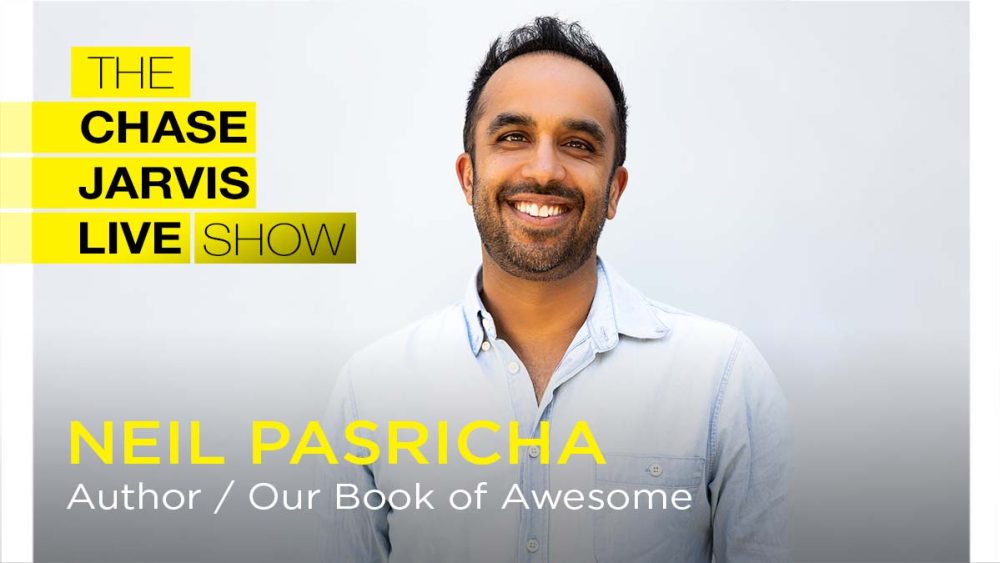 Neil Pasricha is the product of a Kenyan mother and Indian father who immigrated to Canada in the late 1960s. He and his sister were born and raised in Toronto to what he describes a “very, very lucky childhood”, his parents working hard as a teacher and accountant to provide for them both until his early twenties.

It wasn’t until later in life, in his later twenties, that Neil experienced a crisis that would ultimately change him forever. He lost everything within the inconvenient span of just a few days – his wife, with whom he’d been in a relationship for four years, told him she was in love with someone else and wanted to file for divorce; his best friend from Harvard Business School, Chris, took his own life; he had to sell his house, stopped eating, sleeping and eventually lost 40 pounds due to stress.

With a new, unknown landscape ahead of him and no idea what to do, Neil decided to start a blog. A sarcastically-spirited look at the sunny side of life, it  was originally intended to serve as an outlet for his own pent-up frustrations – a way to work out his thoughts and feelings by putting them into words. Neil had no idea, though, that his blog would be so successful.

1000 Awesome Things would go on to win multiple web awards, be translated into more than two dozen languages, spawn a New York Times bestselling book and international stage show, and be read by millions of people in over 200 countries.

Neil has just published the latest book in his series of ‘Awesome Things’ and took the time to sit down with me and chat about his work, blog, and s0me key ways he’s managed to remain so positive throughout the years.

Keep the Phone Out of the Bedroom

If you asked anyone what they did before going to bed last night, they’d probably tell you it was something that had to do with their phone or computer. And that makes sense; today’s society is hyper-focused on the online world, so much so, that Neil considers it a full-fledged addiction. He reasons his belief on the answer of what we do before bed every night. And when we wake up. And when we go to the bathroom. Replace your phone with a bottle of booze and reaching for it so much during the day could easily be labeled alcoholism. The only reason we don’t see it for the major problem that it is, Neil says, is because virtually everyone is doing it.

That’s why he says his number one suggestion for people looking to create more happiness in their lives is to keep the phone out of the bedroom. It’s something he personally does, keeping his charger in the basement so he has to make a conscious effort to go downstairs and get it if he wants to use his phone at night. Leaving his bedroom free of distractions gives Neil the chance to focus on more important things as he begins and ends each day, which we’ll mention later on.

What’s the first thing you do when you wake up? Try to go back to sleep? Loathe existence? Plan your day? For Neil, it’s time to practice gratitude. He strategically leaves a yellow book on his bedside table in place of his phone  so that when he wakes up, it’s the first thing he sees. Inside of it are a series of cue cards with different prompts to help him focus on the positive things in his life.

Filling these out only takes a couple of minutes, but those few moments spent each morning setting the tone for the day have made a profound impact on Neil’s happiness.

A fulfilled life starts with recognizing the good and bad within it. That’s the philosophy Neil lives by, and one he attributes to his wife Leslie, who learned it at summer camp.

Every day, take the time to acknowledge one ‘rose,’ or thing that went well; one ‘thorn,’ or thing that didn’t go as planned; and one ‘bud,’ or thing you’re looking forward to. While the original version just involved a single rose, Neil  has added a second to his list as well. Doing this forces you to reflect on the positive things that have happened, which is an important step in the journey to happiness.

Neil has found that this exercise allows him to take a step back and appreciate all the different aspects of his life, both positive and negative. It’s a practice he’s passed on to his children as well, and one they continue to do together as a family every day.

Continuing on the practice of acknowledging and naming moments of the day, Neil and his family also make a point of regularly  checking in with each other at dinner through an exercise called High, Low, Buffalo.

Not only does this give everyone a chance to connect with each other, but it also allows everyone to share in each other’s triumphs and challenges. Oftentimes, just hearing about someone else’s low can make your own seem not so bad.

It’s a simple way to show your loved ones that you care, and to remind yourself that you’re not alone in whatever you’re going through.

Dan Butner and a team of National Geographic researchers once traveled the world in search of answers to the secret of a long and happy life. Their studies, which focused on what are called ‘blue zones’ took them to Okinawa, a prefecture of Japan known for yielding some of the world’s oldest citizens.

Nail notes that in Okinawa, there is no word for retirement. The concept simply doesn’t exist. Instead, they have a word called ‘ikigai’ which translates to ‘reason for being.’ Everyone has an ikigai, and it’s what gets them up in the morning and gives their life purpose.

Finding your ikigai can be a lifelong journey, but it’s worth it. Once you find it, you’ll have a much better sense of what you should be doing with your time and how to live a life that is fulfilling and satisfying.

Neil says his is ‘helping people live happy lives’ and that everything he does, from writing to speaking to coaching, is in service of that goal. He tracks his monthly progress by writing his priorities down in bullet points.  Neil then looks back at his list at the end of the month and rates himself green, yellow, or red in each category. This traffic light system indicates how he’s doing in each area of his life and allows him to make adjustments as needed.

Finding happiness is a journey, not a destination. It’s something you have to work at every day, and there are many different ways to go about it. Luckily, Neil Pasricha has about 1,000 ideas to help get you started. The five he outlined in our podcast are just a taste of what he has to offer.

If you’re looking for more insight into how to live a happier life, be sure to check out his new book or blog 1000awesomethings.com.