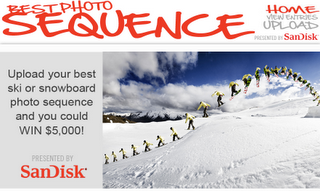 Hopefully you remember the campaign I shot for SanDisk down in New Zealand last autumn. The images were a blast to create and–if you recall–SanDisk was cool enough to let me blog/tweet/facebook about shooting the ads in real time, which made it the first global campaign of its kind.

We made a whole lotta videos and did a several follow up posts, and I received a ton of great feedback from this community about how beneficial this was. If that was true for you, then this might just be the gift that keeps on giving…

SanDisk has decided to give back to our community in the form of pure cash money. They partnered with the kickass crew at Freeskier and Snowboard magazines to bring you The Best Photo Sequence contest. Simple idea: the best skiing and the best snowboard photo sequence selected from a panel of judges that include the photo editors from both magazines and yours truly, will EACH win $5000 bucks cash and have their image run in the mags. Contest just started and runs thru April 1. So get your gear and some gloves and go make some magic.

[update: possible good news for international readers. we’re hearin’ ya about the US only thing. That said, SanDisk is being SUPER cool, there’s a bunch of legal hoops to jump thru here in the US to make contests avail in other countries, but they’re working on it. If the legal team can get it pulled together this week, we’ll let you know. Stay tuned!]

As an aside, this is sorta cool. We had this crazy idea to create a TV show outta our trip down under making this campaign. We pitched it to The Ski Channel and Resort Sports Network and they BOTH went for it. So if you find yourselves… [click the ‘continue reading’ link below]—
…with on-demand cable or you’re in areas where RSN is a featured program (detail forthcoming), check it out and send us your feedback. It will also be available as another episode in a forthcoming podcast, later this week.

Related videos + posts from the SanDisk job to further whet your palette for $5-$10,000 bucks: