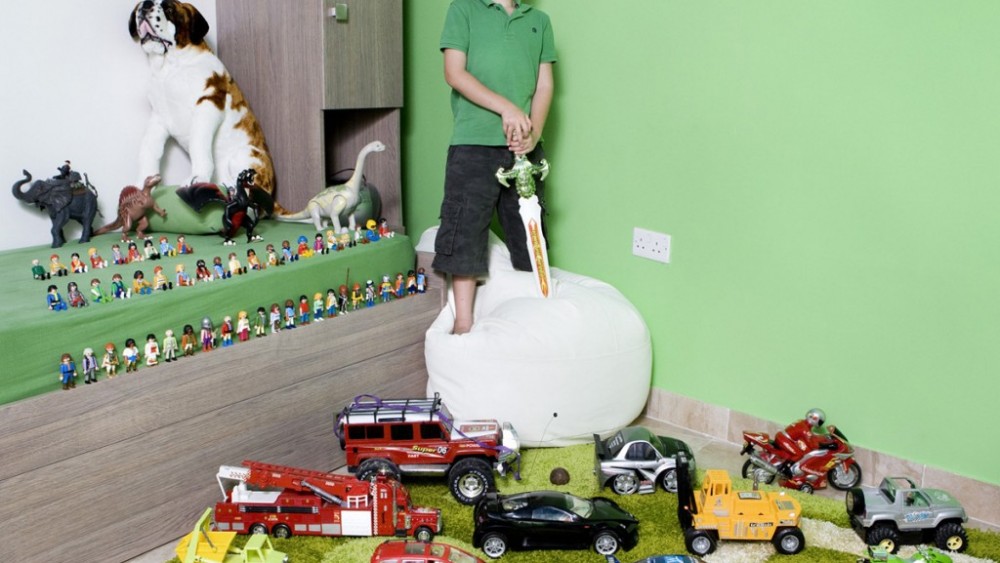 We Are Not Our Toys. Or Are We?

A recent NPR story “Why Politicians Want Children to be Seen and Heard” spoke to the effectiveness of children as political messengers. Federal gun law supporters use images of children to play on the emotions of the masses. “Save Our Children” and all that jazz. Annoying as hell to get ‘used’. But real. And effective stuff, no doubt.

Children have long been the fodder of photogs. Back in January I shined the bloglight on Danny Goldfield, who spent seven years photographing children from over 169 countries — all of whom happened to live in New York City. The portraits are heartwarming and powerful for their diversity and depiction of the innocence and resilience of youth.

Flashback also to the World Press Photo of the Year. The cries of anger and sorrow captured in the faces of a group of men carrying two dead children.

Which brings us to today’s work, with a twist. Gabriele Galimberti’s “Toys Stories” project took 18 months and brought him everywhere from Malawi and Zanzibar to China and the Ukraine. His concept was simple enough: capture children from around the globe, posing with their favorite toys.

Despite the obvious socio-economic differences apparent across the subjects captured, Galimberti observed a thread common to every child he shot:

At their age, they’re pretty much all the same. They just want to play.

We are all the same, right? Well, interestingly, Galimberti did find one difference of note… that the children from more affluent backgrounds tended to be more possessive of their belongings, requiring a bit more coaxing and persuading from the artist to get them to share. Of the children from poorer countries, Galimberti had this to say: “In poor countries, it was much easier. Even if they only had two or three toys, they didn’t really care. In Africa, the kids would mostly play with their friends outside.”

You can connect the dots on that one – I’ll say nothing.

Regardless, here’s a fantastic sampling of Galimberti’s work below. Please pay him a visit to view the project in its entirety here. #respect.